Composed in 1796, Joseph Haydn’s ever-popular Trumpet Concerto in Eb Major was his last major orchestral work. At this point in his life, Haydn had just moved back to Vienna, and so the first performance of the concerto was on 28th March 1800 at the Burgtheater in Vienna. The premiere performance was performed by trumpeter Anton Weidinger.

The trumpet has had a steady evolution over the last few centuries. From the frankly restricted natural trumpets (with no valves or keys), to the highly-flexible trumpets we know today, this evolution has affected the course of orchestral music. As the 18th century drew to a close, the demand for harmonic complexity in classical music made it difficult for natural trumpets to keep up. They were relegated to playing tonic-dominant phrases, cadential points and the occasional fanfare in the upper range. There is nothing wrong with this, however. Natural trumpets played their part in music history. 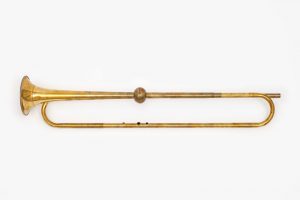 Repertoire for other instruments became more challenging and diverse, which began to leave behind the natural trumpet. People started calling for a new instrument that could play chromatically. There were several valiant attempts at creating a keyed trumpet, but most were very expensive to produce and subsequently sell, so they did not gain the traction they desired. Records are not exact enough to be able to determine the origin of the keyed trumpet. What is agreed is that Anton Weidinger was the instrument’s foremost performer. 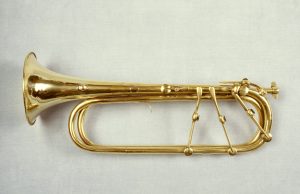 Weidinger and Haydn were close friends and often worked together. His abilities as a trumpet player would have aided Haydn’s compositional process of his Trumpet Concerto. The eagle eyed readers will have noticed that the concerto was composed in 1796, but was not premiered until 1800. This was due to the complexity and maturity of Haydn’s writing which meant that Weidinger needed much longer to get this new keyed trumpet in sync with this kind of harmonic writing.

The opening movement is in sonata form. The orchestra proclaim the primary theme from the off with no introduction. This creates a sense of excitement for what the soloist will be playing. The orchestra begins to develop the theme before the soloist enters, although this comes to an abrupt perfect cadence as the soloist begins.

There is a real sense of playfulness in Haydn’s writing in this concerto. Haydn liked to entertain and play with the audience, just look at his Surprise Symphony (No.94) or even The Joke String Quartet (Op.33). From trumpet fanfares that could be performed on a natural trumpet to the long drawn out chromatic lines, Haydn exploits the trumpet and pushes it to its limits throughout.

Haydn adheres to a clean cut classical era sonata form. The end of the movement mirrors that of the opening. The uncomplicated use of the theme allows Haydn to easily transition back into the primary theme at the end, which is wholly pleasing. The end of the movement is marked by a cadenza from the soloist. The cadenza is comprised of fragmented themes from the movement. After this a short coda is played by the orchestra before the movement ends triumphantly.

The second movement shows another side of the trumpet. The slow tempo and lyrical melodies highlight the trumpet’s softer side. After an 8-bar introduction from the orchestra, the trumpet then plays the same theme. The theme is passed between the orchestra and trumpet as it slowly develops over the expanded ternary structure that Haydn has created. The last section, again, mirrors the opening, although this time it is embellished with scalic runs and decorations. This short movement ends with a 4-bar coda played by everybody in unison.

Set in sonata-rondo form, the quick paced third movement is full of clean articulations and exciting melodies. Similarly to the other movements, the finale movement opens with the orchestra proclaiming the primary theme. The style of the theme lends itself to grandiose fanfare playing for the soloist, which is something we haven’t heard yet.

The clean articulation needed from the soloist in this movement adds to Haydn’s mature way of writing. With each instrument perfectly placed, the soloist has artistic scope to perform tricky ornamentation and virtuosic fanfares to add to the excitement of the concerto. Haydn uses quick changes in dynamics to add to the effect of the movement. The octave leaps from the soloist adds to the tension as the music moves back to the opening melodic material.

The grand fanfare ending pulls all the best things about trumpet playing, showcasing the instrument as versatile and ‘up to the job’ so to speak. Haydn teases the listener at the end before the fanfare-driven finale bars.

During his lifetime Haydn composed 17 concertos, four of which are still regularly played today. Out of the four, his Trumpet Concerto is by far the most popular. Well-loved recordings of the concerto have been made by leaders of the trumpet performance world including Alison Balsom, Wynton Marsalis, John Wallace and Tine Thing Helseth. Due to the further developments made to the trumpet, Haydn’s concerto is even easier to play on a piston valve trumpet due to the added ease for dexterity and aids in pitching. Either way, Haydn’s Trumpet Concerto is a staple in trumpet repertoire and certainly always will be.