Patrick Doyle ‘Harry in Winter’: A Development of Character

With the first three Harry Potter films accompanied by music from American composer John Williams, the fourth instalment, Harry Potter and the Goblet of Fire, saw music by Scottish film composer Patrick Doyle. Doyle only composed for this one film in the Harry Potter franchise, with British composer Nicholas Hooper taking the reins for films five and six.

Doyle has been nominated and also won a number of awards for his film scores including the 2002 World Soundtrack Award for ‘Soundtrack Composer of the Year’, the 1995 Academy Award for ‘Best Original Score’ in Sense and Sensibility, and the ASCAP 2006 ‘Top Box Office Films’ for Harry Potter and the Goblet of Fire.

The switch of composers for the fourth Harry Potter film was down to complicated scheduling problems on Williams’ side, as he was also composing music for Star Wars: Episode III – Revenge of the Sith, Memoirs of a Geisha, Munich and the remake of War of the Worlds in 2005.

The music was performed by the London Symphony Orchestra conducted by James Shearman in 2005. Doyle only used a small snippet of Williams’ music from the previous three films, which came in the form of Hedwig’s Theme which makes an ominous reprisal throughout the film.

Doyle composed three new main themes for the film which included one for Harry Potter, Lord Voldemort and the Triwizard Tournament. The soundtrack has been praised for its seamless transition from one composer to another, as well as its new themes and darker undertones. 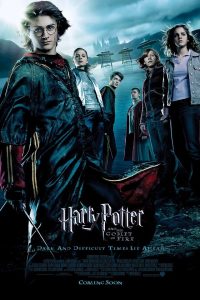 Harry in Winter is the full-length version of Harry Potter’s new theme. The music acts as a leitmotif for the character throughout the film and follows Harry through various situations including asking Cho Chang to the Yule Ball, during Priori Incantatem (reverse spell) duel between himself and Lord Voldemort and also the death of fellow student Cedric Diggory.

The theme is heard in the scene where Harry is running up some snowy steps in a tall turret of Hogwarts. The camera pans out to reveal a picturesque winter landscape and the luscious theme thickens in texture to mirror the picture on screen. Soon after this scene the story comes back to Harry asking Cho to the Yule Ball, where she rejects him and the theme becomes much quieter and meek.

The theme itself is tranquil and is directed to be played Cantabile on the score. With the constantly moving accompaniment parts playing an alberti bass-esque sequence, the main melody is able to sing out above. Led by the violins this theme relies on a dotted notes to create a sense of suspense. After the initial theme is heard it is then developed through Doyle’s use of triplets and expressive score markings.

The theme is innocent in its portrayal of Harry, and shows him in a juvenile light. When the theme appears when he sees his parents during Priori Incantatem, it highlights his youthfulness. The theme is also used to represent the death of Harry’s fellow student, Cedric Diggory. Harry’s theme is used here because he witnessed the murder of Diggory and when they use the port key to return to the  Triwizard Tournament, Harry is holding Diggory’s body. The theme is manipulated here to be in the top range for the upper strings, is even slower in tempo and is much more reliant on the minor mode.

Harry in Winter is an iconic theme within the eight Harry Potter soundtracks, as it followed the main protagonist through some of his toughest times during the fourth film. Doyle’s soundtrack for Harry Potter and the Goblet of Fire is ingenious with the three main themes spread across the whole film. Harry’s theme has since been used in quotes by other Harry Potter film composers Nicholas Hooper and Alexandre Desplat.

Tarik O’Regan: Latent Manifest Context Tarik O’Regan was born in Croydon in 1978, and his mother was Algerian so in his very early life he spent a lot of time abroad. O’Regan claims he was Read more…