Sergei Rachmaninov: Isle of the Dead

Inspired by Arnold Böcklin’s painting called Isle of the Dead, Sergei Rachmaninov’s symphonic poem of the same name was completed in 1908 during the composer’s stay in dresden. Rachmaninov saw Böcklin’s painting in 1907 whilst in Paris, but instead of the original painting, Rachmaninov saw a black and white reproduction, which really took him aback. However, upon seeing the original painting later on he commented that “If I had seen first the original, I probably would not have written my Isle of the Dead. I like the black and white.” 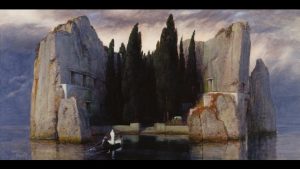 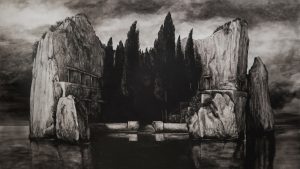 Both versions of Böcklin’s ‘Isle of the Dead’ painting

Böcklin’s painting is mysterious and shows a solitary boat that is bearing a coffin and is heading towards an island. Rachmaninov was not the only composer to use this painting as inspiration, Max Reger some four years later also composed an orchestral work based on the same scene. Rachmaninov’s Isle of the Dead is dark and mysterious and captures the essence of the painting.

The piece opens with a rumbling of irregular movement, which represents the movement of oars in the water. Mahler used the same technique just four years earlier in his Seventh Symphony, it is a really effective way to represent the movement of water. The dark and mysterious opening is led by the lower strings, timpani and harp.

For a while the music moves along with no obvious destination. There is a growing urgency in the music, however, as Rachmaninov’s orchestration shines through. Fragments of music appear like glimpses of the island through the mist. The gloomy lower string and wind theme is decorated with pieces of a horn solo before a haunting upper violin theme takes over the music.

After a lot of travelling on the water, the island begins to come into sight. The music gains small doses of momentum through dynamic force and subtle changes in rhythms. As the music grows towards climaxes in rich textures cleverly crafted by Rachmaninov. The slowly heaving of the lower end keeps the feeling of being on water at the forefront, with crashing waves, trudging oars and the frantic movement of the boat.

Rachmaninov also quotes the Dies irae, which is set in 5/8 time. The allusion of death here is really quite dramatic. As the drama of the music intensifies, the veil of death is slowly lifted as the coffin reaches the shores of the island. It’s also been said that the unusual 5/8 time also represents the heavy and unregulated breathing of the oarsman, which creates a line of unity between life and death.

The music comes down in dynamic, texture as an oboe solo sings out across sparse strings. A brass chorale is also heard, which plays much more to the funeral idea of the piece. The chorale is based on the Dies irae, making it all the more haunting. The chant is prominent towards the end, with the music beginning to become clouded. It seems that the veil has been dropped on the island, and we are left where we began – with rumbling of ceaseless rowing.

Elizabeth Maconchy ‘Nocturne for Orchestra’: Amidst the Nighttime

Elizabeth Maconchy: Nocturne for Orchestra Context Elizabeth Maconchy was born to Irish parents in Hertfordshire, 1907. After her birth, the family moved back to rural Ireland, where Maconchy began taking piano lessons. She started to Read more…