Composed in 1801, Beethoven’s fourteenth piano sonata is perhaps his most famous. Now known as the Moonlight Sonata, this solo work for piano is regularly performed around the world in recitals, exams, and in homes.  The work was dedicated to the Austrian countess, Giulietta Guicciardi, who was briefly a piano student of Beethoven’s. Many of you will know this work for its heart-wrenching first movement, but this work actually has three movements, all of which are fantastic in their own right. The different characters that Beethoven creates in each one of these dynamic movements makes this sonata unique, so no wonder it is still so popular!

Unlike traditional movement arrangement of fast-slow-fast, Beethoven uses a slow-moderate-fast sequence of movements. The change in speed throughout the movements give this work momentum for the fiery final movement. It is thought that Beethoven wanted to start with a prelude to the other movements, which is why the first movement seems like a somewhat introduction to the work. The three movements are laid out as follows:

Interestingly, the work was not initially labelled as the ‘Moonlight Sonata’, but instead its original title was: Sonata quasi una fantasia (‘Sonata in the manner of a fantasy’). It was after Beethoven’s death when German music critic Ludwig Rellstab interpreted the first movement as the moonlight shining upon Lake Lucerne. From that point onwards this name started to be used within publications, and by the mid-nineteenth century this was the universal name used to refer to this work. Of course, Rellstab’s opinion on this work is subjective, but I would read the first movement as more like a funeral procession of sorts. Thus the movements play out the journey after death, with the fiery final movement offering symbolism of the final fate of the person in question. However, my opinion is also subjective, so see how you feel after listening to the whole sonata! 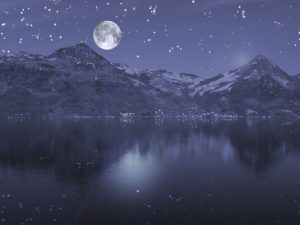 The first movement is in C# minor, and is often played very slowly. The form is A-B-A, and opens with an octave C# in the left hand, and a triplet sequence in the right. This ostinato rhythm is heard throughout this movement, and also serves as the melodic core of this section. The mood of this music is mournful and dark, which creates this unique ghost-like atmosphere. The music never goes beyond piano in dynamic, with most being played ‘very quietly’. These delicate dynamics aid with the atmosphere that Beethoven was likely trying to create. This movement has always been the most popular of three, both in the modern-day, and when Beethoven composed it.

The second movement is a conventional scherzo and trio movement that is written in Db major – the enharmonic of C# major, making this key the parallel major of the first movement’s key of C# minor. By far the shortest of all three movements, I find that this movement is a friendly interlude between two very intense movements. This movement has a quintessential classical air to it, with the functional harmony and simple melody leading towards the fiery finale movement.

As the longest and most weighty movement of the trio, this stormy final movement is full of drive and excitement. This movement is typical of an opening movement of a sonata, so the fact it comes at the end in this work was borne out of an experiment Beethoven tried. By moving the most ‘important’ movement to the end of the work creates anticipation and really can pack a punch!

The music is complex and fast-moving, with it being based on fast arpeggios and alberti bass lines. The ferocity of this movement is down to the strong accented notes, loud dynamics (in comparison to the quieter first two movements), and the skill it requires to create the intended mood of this work. This is an astonishingly powerful way to finish a piano sonata, which is perhaps why it is so sought after even today.

You might also enjoy… Ludwig van Beethoven: Piano Sonata No.17

Gabriel Fauré: Pavane Context Originally composed for solo piano, Gabriel Fauré’s Pavane is now better-known for its orchestral and optional choir versions. The all-orchestral version is performed often across the globe, with it also being Read more…

Dag Wirén: String Quartet No.3 Context Swedish composer Dag Wirén’s musical oeuvre can be summed up by looking at just his five string quartets. Composed between 1935 and 1970, the span and development of Wirén’s Read more…