Used as the second section Area test piece in 2018, Jonathan Bates’ composition Ex Terra Lucem made quite the impression on brass bands across the country. As well as being a prolific young solo tenor horn player, Jonathan Bates is a composer in demand in the brass band world. His keen interest in composition from an early age has helped him in receiving commissions from contests, bands and other famous artists. Perhaps his first important, and successful, commission was when he composed a tenor horn solo that was premiered as part of the prestigious Black Dyke Brass Arts Festival. In his short, yet fruitful career thus far, Bates has been tutored by brass band giants Philip Wilby, Bramwell Tovey, and Edward Gregson.

Bates has composed other test pieces, including his extended work Within the Paths of Righteousness, which was premiered by the National Youth Brass Band of Great Britain. In 2012, Bates become the youngest composer to receive a premiere of a work at the Royal Northern College of Music’s Festival of Brass, as well a being the youngest composer to be chosen for a National Finals test piece (4th Section).

His composition for brass band, Ex Terra Lucem was chosen for the 2018 second section regional contest. A short synopsis of the work from the composer is shown below:

“Ex Terra Lucem, translating to ‘From the Ground, Light’ is the motto of the Merseyside town of St. Helens, which pays homage to the rapid growth of the town during the industrial revolution.

This motto was also a large influence on Danny Boyle’s opening ceremony for the 2012 Summer Olympic Games in London. Ex Terra Lucem is composer, and dedicated to Jay Hall and the St. Helen’s Youth Brass Band, following his appointment as musical director of the band in July 2016.”

The work, although played through, is set into three defined sections:

III. From the Ground, Light

The opening note of the score reads:

“The main musical material of the work is derived from a graph on the current façade of St Helen’s Town Hall. By overlaying a musical staff onto an image of the building, the contours, peaks and troughs provide a series of notes, or a tone row, as shown below.”

Here is what the image and tone row looks like: 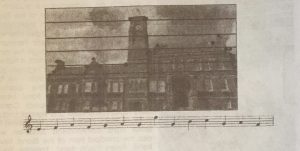 “The Brigantes were a Celtic tribe who settled in an area covering much of the North of England across the counties that would ultimately form Lancashire and Yorkshire. Where St Helen’s currently sits is within this area, and the tribe were settled in this region until the 1st Century AD Roman Conquest, when nearby Wigan was selected as a place for a new Roman settlement, and the Brigantes became subjugated. Throughout this movement, there is a strong feel of the traditional ‘Celtic’ musical elements, with an almost dance-like feel to much of the rhythmic work, and light-footed solo playing.”

Beginning with a flourish from the cornets, Ex Terra Lucem establishes a quick tempo. A driving rhythm from back row cornets and horns are passed around the band throughout the work, and creates a syncopated feel. When the solo cornets play next, their melody resembles the tone row shown above in the image. As the programme note suggests, this first movement is rather dance-like in its portrayal of rhythms, and this is what adds to the character of the work.

A lyrical sections sings out, with the flugelhorn playing a diluted version of the previous cornet melody. This leads up to the band unifying for a welcome resolution section that has risen in dynamic. A march-like section drives the next small section of this movement. Bates uses subtle dissonances here which resonate throughout the band.

A light and bouncy euphonium solo takes us back into the dance-like feel, with the 12/8 time signature driving the tempo and rhythmic structure of this movement. This first movement is fiery, full of complex rhythmic structures, and quick moving harmonies. The segue into the second movement comes from a large dissonant chord, which then resolves into a much quieter dynamic as instruments begin to die away. The short minims played by the muted cornets perhaps shine a small ray of light as we go into the second, much slower, section.

“The name of St Helens dates back to 1552, with the first documentation of a chapel of ease dedicated to St Elyn in Hardshaw (near the site of the current pedestrianised Church Street). The Chapel was said to be the crux of the four townships of Eccleston, Parr, Sutton and Windle. These civil parishes were what eventually became the borough of St Helens. As a reflective and tranquil core to the work, I decided to pay homage to two composers from both the orchestral and brass band worlds, who’s music I find emotionally engaging: Arthur Bliss and Eric Ball.”

This tranquil section requires much control from all instruments, as it is incredibly quiet throughout. The flowing melodic lines go hand in hand with the luscious accompanying lines from the bottom end of the band. The extra quiet section near the end of this movement shows real control in the cornets and horns, who are muted and marked ppp. This serene section offers some stasis to the movement. The delicacy of the note placement gives it a feel of floating, which is perhaps what Bates means by emotionally engaging with the music in an other-worldly way.

III. From the Ground, Light

“Until the mid-18th Century, the towns and local industry was mainly based on small-scale home-based initiatives such as weaving and light extraction. Sitting on the South Lancashire coalfield, the town was physically and metaphorically built on coal, and it was this reason that the council’s coat of arms bear the motto ‘Ex Terra Lucem’. The phrase refers to both the abundant and winnable coal resources (which can be burnt to produce ‘light’) in addition to their use in local industries, such as glass (through which light passes).

The motto of the town and larger borough was changed in 1974 to ‘Prosperitas in Excelsis’ (Success in the Highest, or, Flourishing Well), which is included on the arms of the Metropolitan Borough Council, but following it’s inspiration of the Olympic Games’ Opening Ceremony in 2012, residents felt the original motto was more appropriate to the town’s history and had a greater meaning for the local people representing hope for the future, and the motto was changed back to it’s original.

Like the coal industry, the music is a ‘slow-burner’, gradually building from a quiet, high minimalist-esque figure in the cornets at the outset through to the thunderous clunks and clangs of machinery towards the end of the movement. The majority of the movement has a sense of minor tonality, before the light emerges from the depths at the close.”

The cornets begin this movement with a very minimalist approach, with neat motor rhythms that create two halves of a semiquaver throughout the bar between the parts. These driving rhythms lead into the louder and ‘clunkier’ section, which Bates states represents machinery. The thunderous end to the work sees a wonderfully dissonant chord built up through the instruments, from lowest to highest (i.e from the ground, light).  All of the energy spent developing the themes of this work comes down to the last sixteen bars or so of the work, which ends with a powerful climax throughout the band as they unify on the final chord.

You might also enjoy… Stephen Bulla: Images for Brass

I, too, played at this contest. Some members of the brass banding community weren’t quite so enamoured by the piece as I was. I still adore it after well over 50 plays. For me, the movement between three distinctive styles and that groovy, rhythm driven, mechanical final section is sublime. It’s certainly a piece that deserves to move the brass banding community forward into the future.