Born in Yerevan, Alexander Arutunian (1920-2012) was soon recognised as an accomplished pianist and composer, and subsequently, he studied at the Conservatory of Yerevan. After deciding that a career as a composer was right for him, Arutunian joined the U.S.S.R’s Union of composers in 1939. This was, however, on the brink of World War II, so from this point onwards, Arutunian’s education was put on the back burner.

After the war, the composer travelled to Moscow to study composition at its Conservatory, with Ilya Litinsky, Viktor Zuckermann and Nikolai Ivanovich Peyko. Upon completion of his degree in 1948, he was awarded the Stalin Prize (a U.S.S.R state prize) for his cantata Motherland, which he wrote whilst studying. With some works being fairly popular in the Soviet-Armenian sphere, Arutunian was more often than not overshadowed by fellow composer, Aram Khachaturian. However, this did not hinder the composer in any way, which can be seen and heard in his most popular work – Trumpet Concerto in Ab Major.

The concerto was composed in 1950, and was written for Ukrainian virtuoso trumpeter, Timofei Alexandrovich Dokschitzer. He was the first to record this concerto and bring it to fame both in the Soviet Union and in the USA. The concerto was the sixth major composition by Arutunian, and it is perhaps his most well-known work. The concerto is still incredibly popular today, and it is often used as an audition piece for music conservatories across the world.

The work lasts for around 16 minutes and it is one single movement, which can be dissected into seven different sub-sections (without a break). For the soloist it is a showpiece which incorporates Eastern European melodies, a demand for stamina and fiery technical ability and an opportunity to be loud and proud in the full tutti sections.

The beginning of the work starts with a strong tremolo from the lower strings, with the soloist entering in the second bar with a quaver-movement motif, which is then used as a call and response cell of music within the ensemble. The solo part is marked ‘Breit ferierlich’ which translates to ‘Wide and Solemnly.’ The motif is modified ever so slightly and the soloist is right at the forefront at the beginning, with only the lower strings to accompany.

The use of triplets and semiquaver runs creates an interesting play with the tonic key of Ab major and the quaver motif. After this introduction a 10 bar transition section which is played by the orchestra, that leads into the next section which is much more upbeat. This new melody played by the soloist is exciting and technically demanding as there is a complex mix of single and double tonguing.

The first slow section of the concerto showcases the disciplined communication between the soloist and the orchestra. The melodies are long and beautiful, which shows us a whole new side to the trumpet as a more delicate instrument. The soloist sings above the strings and some faster-passage work leads to a wonderful ascending sequence into the upper-range of the instrument. This section is ended by the orchestra, who then lead into a faster part of the work.

The soloist interjects at points with a fanfare-like motif. This is then taken and used for the rest of this section. This section uses lots of double-tonguing, which creates tension and excitement. The tone and sound of the soloist is vital within this section as there are some very poignant fanfare motifs which are instructed to stand out from above the whole orchestra. The soloist finishes this section with a climactic chromatic run in the upper register and then the orchestra takes over until the next section begins to emerge. 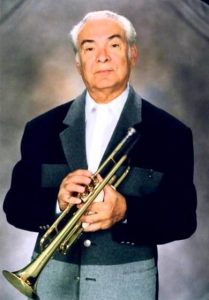 We are now at the slowest section of the concerto, with it starting with the strings playing a syncopated pulsating theme. For the first time the soloist is muted, and the energy of the piece has left momentarily and we are left with a rather melancholy melodic passage. The delicate nature of this section is a sigh of relief from the other intense sub-movements of this concerto.

After this section, the orchestra lead us slowly back into the recap section of the main theme heard in the second section. This is then used as a way to lead us into the coda section which is by far the most virtuosic part of the work. After the motif is recapped there is a climactic section which comprises of double-tonguing, a fast quaver passage leads to a massive proclamation at the end.

The coda is virtuosic and it is comprised of fast movement, tone and air control in 3 different ranges and requires a strong amount of stamina. It takes all the earlier themes and creates an imaginative, exciting and technically demanding coda which shows off the soloist to the max. The piece ends with triplet movement and then 4 strong beats played by the soloist and the orchestra.

This piece is fizzing with interesting harmonies, timbres, melodies and textures which all come together to create a truly powerful trumpet concerto. It highlights and accentuates the fundamentals of brass playing – range, stamina, technical prowess, and tone.