Julia Gomelskaya was born on March 11, 1964 in Ukraine. She studied composition at the Simpheropol Tchaikovsky Musical College in 1983. Also a talented pianist, Gomelskaya studied under Oleksandr Krasotov. After graduating from the college, Gomelskaya went on to study composition at the Ukraine Odessa National A.V. Nezhdanova Music Academy (1990). She received a distinction for her degree and won first prize at the Ukrainian National Composers’ competition (1993). Gomelskaya also won third prize at the Women Composers’ Competition (Kiev, 1995) and the first prize at the International Composition Contest of Comines (2003).

In 1995, Gomelskaya was awarded a fellowship for postgraduate study at London’s prestigious Guildhall School of Music and Drama. Here she received an MMus in Composition with distinction. Whilst at GSDM, Gomelskaya won six composition competitions, and consequently, two of her works have since been published by GSDM and are a compulsory element of the audition process. As well as her MMus, Gomelskaya also earned her PhD in Music Art. She has travelled around the world to be a part of small and large music festivals. Gomelskaya’s music has also been recorded by some of the world’s top musicians. BBC Radio 3 have recorded her chamber opera, The Divine Sarah and also the ballet music for, Jane Eyre. 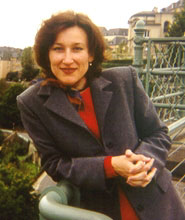 Her works cover a wind-range of styles including symphonic, chamber, ballet, opera, vocal and electronic music. Some examples of her compositions include:

She has produced many CDs of her own music and her published works are mainly by Sorino Esiziuns Musicales. She is a member of the Ukrainian National Composers’ Union as well as the Laureate of the B. Liatoshynskyj Prize and the Odessa Municipal Prize (2011 & 2006). Gomelskaya has had an array of commissions throughout her career which has allowed her to work with some professional musicians and ensembles.

Memento Vitae was composed in 1996 and is composed written for a small-scale symphony orchestra. The work encapsulates the idea of spiritual movement and the concept of the afterlife. At nine minutes in duration, this work is a constant flurry of sounds from within the orchestra, with Gomelskaya utilizing all areas of the ensemble as well as some extended techniques. For example, pitch bending and flutter-tonguing are among the most popular extended techniques that Gomelskaya uses in Memento Vitae. There is no key, which said to represent spirits not being tied down to one tonality. The use of chromatic runs and open chords create ingenious spatial awareness.

The most exciting parts of this work are the constant changes between very busy and much sparser sections. Gomelskaya’s use of tuned percussion makes these quieter sections much more atmospheric, as the vibraphone and tubular bells create celestial effects. The choice to confine this music to a smaller orchestra means it is much more intense and concentrated in places.

Memento Vitae requires a lot of stamina, concentration, and dexterity to be able to play the parts in perfect synchronisation. Gomelskaya’s use of polyphony and counterpoint makes this work very complex and exciting. The work ends eerily with static strings and a simple melodic input from the winds before just drifting off. The spiritual undertones of this work can shine a new narrative on the music – creating a multi-dimensional reading of the score.

Julia Gomelskaya was an inspirational composer, and after her tragic death in 2016 it is vital we keep her music alive for years to come. This blog is in memory of her.

You might also enjoy… Thea Musgrave: Song of the Enchanter