Born in 1951 in London, Philip Sparke studied composition, trumpet and piano performance at the Royal College of Music. Due to his affiliation with brass, Sparke is known for his many popular works for both brass bands and wind orchestras. Sparke has won notable awards for his services to music, including the Iles Medal of the Worshipful Company of Musicians for his services to brass bands (2000), and the 2011 BUMA International Brass Award for his contributions to brass music.

Sparke’s music has become a staple in most brass and wind band rooms, with some of his most popular works including Jubilee Overture (1984), Madrigalum (2006), The Year of the Dragon (1984) and A Yorkshire Overture (1991).

As well as popular concert pieces, Sparke is also known for his contributions to brass band test pieces. Throughout the years Sparke’s works have been chosen as test pieces for both the Regional and National brass Band Championships of Great Britain. His works span over all five sections, with works used including A Malvern Suite (1985; Regional Contest; fourth section), Harmony Music (1987; National Championships; Championship Section), The Land of the Long White Cloud (1995; Regional Contest; first section) and Endeavour (2019; National Championships; first section).

Originally commissioned by the Festival of Bands, Brisbane 1988, for the Bicentennial World Brass Band Championship, Endeavour takes inspiration from James Cook’s discovery of Australia and New Zealand. Endeavour was the name of the ship that Captain James Cook circumnavigated the world. Sparke’s music aims to reflect some of the amazing sights that Cook discovered in this new continent in the late 1700s. 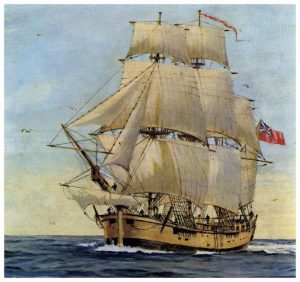 The opening movement tells the story of the many fruitless voyages undertaken to find the mysterious ‘Terra Australis’ and conjures up something of the awe and excitement its discovery engendered.

The New Challenge depicts the early struggles and hardships of the first settlers.

As the title suggests, Celebration ends the piece in triumph as the true story of Australia over the last 200 years is one of huge success.

Opening with muted basses and percussion, the mysterious scene is set straight away. With pedal notes supporting an emerging Eb bass solo, the dynamics are low to make way for a trombone trio. Perhaps representing a sound on the boat, this muted trombone trio starts off the excitement of the expedition. Following this comes a jaunty muted euphonium solo, who is then soon joined by the second euphonium. To support this angular solo, the basses have started to play a rocking rhythm, which adds to the motion of the piece.

Muted back row cornets and trombones unite to play a pointed fanfare that leads to a musical dialogue between them and baritones. The front row cornets enter with a variation of this fanfare, which quickly builds to a full band climax as the music carefully moves between time signatures such as 4/4, 3/2 and 4/8. The burst of colour throughout the band is massive and this represents the true excitement of this voyage and what they have begun to discover.

After the full climax the band quickly comes down, with the lower band playing aggressive trills until a small silence. The euphoniums and Eb bass then play a swirling ascending scale, which grows from piano to forte in just two beats. This leads to a general pause that is accentuated by the BBb bass. From this a quiet muted passage is played by front row cornets and trombones, which leads into the tumultuous next section.

After a pause the music shoots into a new tempo, with the basses driving the force underneath as the upper band play discordant motives. Driven by the percussion and basses, the horns and baritones play a turn motif that is accentuated by trombone stabs. The euphoniums take over the melody here, and as they grow in dynamic, so does the rest of the band.

The cornets enter again with a semiquaver-quaver sequence that sees them faced with awkward movement, perhaps representative of the challenges being faced on the ship. A note led by soprano and euphoniums leads into the band uniting for a very quick motif which sends a powerful message across the band. The tension builds before a flourish of semiquaver runs swoops through the band.

This leads to the first proper melody of the piece. The bold accented crotchets lead to an acrobatic sequence played by front row cornets and trombones. This resolves into a slightly easier key for the band for all but eight bars. The relief here soon builds to another small climax which sees the band battle with the percussion.

The music quickly drops again and the solo horn and flugel take the melodic line. A baritone scale descends the music into a rather foreboding section, led again by the euphoniums. The lower band, in particular the euphoniums and baritones play fast scalic lines underneath the horn that enter again with the melodic line.

A small cornet interjection is heard before the front row play the next ascending motif, which becomes a call and response figure with the trombones. This builds up in dynamic until a raucous section is unleashed, with half the band playing syncopated stabs, and the other playing on the beat quaver-semiquaver sequences. The band unite again for descending scalic runs that lead to a powerful syncopated two bars which sees syncopated stabs from some parts, and on the beat crotches from others. This creates a really bold and powerful effect that is relieved by a chromatic run. The small dialogue between euphonium and baritone segues the music into a sudden ‘Lento’ section.

The muted front row cornets leads this quick change with a descending semiquaver pattern that is answered by a solo flugelhorn. The solo becomes a duet as the euphonium joins in. A solo cornet emerges to play an emotionally-driven solo, which is accompanied by very quiet trills from the lower band. The solo horn takes over from the cornet solo, which eventually leads us into a climactic end to this section.

The lower band, euphoniums, trombones and basses specifically, play a syncopated motif that leads the upper band to play a trill to lead us into the exciting final movement of Endeavour.

As the title suggests, ‘Celebration’ showcases the triumphs of the discovery mission. The music represents this excitement with the front row cornets playing an accented and dynamic melody. Based around syncopated semiquaver movement, Sparke litters the fats-moving melody with bold accents to bring out the character and celebration of the music.

What’s pertinent for me is the seamless coming together of the band at this point, although not all playing the same melodies, the band feels much more united at this point, making it a focal point of the work. A perky euphonium solo is heard, and is accented by two cornet flourishes.

This section also sees some typical Sparke writing with changing time signatures for similar rhythmic outcomes. At one particular point he moves between 4/4, 6/8, 5/8 and then back to 4/4 in just four bars. When the 4/4 starts again the front row cornets play a tricky interlude which builds even more excitement through the quick movement of triplet semiquavers and the rogue loud stabs.

The music comes down in dynamic and builds as well as gradually accelerating in tempo. The cornets play a motif in octaves which leads to the euphoniums playing a motif that is answered directly by the front row cornets. The driving force behind this section is the snare drum, which keeps the excitement going whilst also slowly pushing the tempo forward.

Another climax explodes and the cornets become very regimented playing a fanfare-like sequence. Above this the lower band have the melody. A reprise of the initial Celebration melody is played, which turns into another regimented fanfare for the cornets, with the lower end once again taking the melody.

This descends into another quiet passage with the euphoniums playing fast semiquaver scalic runs, which are matched by the front row and flugel two bars later. This swirling motion builds and builds before exploding into a syncopated 3/4 section. The lower band then state the last bold theme before it’s answered by the upper band. The syncopated 3/4 motif returns and this time it’s decorated with quick descending scales, which shows the development of the music by this point. The snare drum keeps the pace going with a quaver-semiquaver rhythm.

A very sudden allargando is written which slows the music right down before a climax bar that is resolved by one moving note. This note then transitions the band back into the ‘presto’ tempo as it builds towards the end of the piece. A long note marked for the upper band before the lower band play four syncopated stabs and the band unite for the final time on the F major9 chord.

With traps placed around every corner from Sparke, such as awkward mute changes, difficult motives to both read and play and purposeful dissonances, the work is certainly a big Endeavour. The nautical themes can be heard perhaps most prominently at the beginning of the piece, led by the trombones and basses. Overall, the work is titillating, jubilant, mysterious, nautical and so much more.

This blog is dedicated to my friends at Old Silkstone Brass Band.

You might also enjoy… Philip Sparke: The Year of the Dragon