Author, broadcaster, composer and presenter Stephen Johnson is one of the most celebrated in the business. His work on BBC Radio 3 hosting the much-loved series ‘Discovering Music’ still informs and excites those who listen years after they first were broadcast. His engaging manner as a presenter comes across at concerts, talks and conferences, with his musings on classical music being embraced everywhere he goes.

Also a published author, Stephen has written books on Shostakovich, Mahler, Bruckner, Beethoven and the Classical Era. His natural flair for speaking translates into his writing, making his works accessible, engaging and wholly interesting.

It is with great excitement that I caught up with Stephen between his busy schedule to talk to him about the projects he’s been doing, why he loves what he does and what’s coming next for him:

1) You got into music journalism after first pursuing your love of composition. What was it that drew you to be creative in your writing of words over the dots?

I’ve always loved words as much (or almost as much) as music. I’ve read great deal since my teens, but I’ve also been inspired be really good writing about music. I remember well some of the writings (sometimes the actual words) that unlocked new pieces of music for me, and it’s always thrilling to discover when I’ve done the same for somebody else. And it’s an interesting challenge, because words and music are so different, and operate on different parts of the brain.

There’s a saying I’ve heard often: ‘Writing about music is like dancing about architecture’. But if I were a choreographer I think I’d love the challenge of creating dance about architecture! Surely something might come out of it!

2) People will know you (or your voice!) from the many ‘Discovering Music’ episodes you presented for BBC Radio 3 over the years. How did you find using the medium of radio to get your musicological musings across?

I love radio, especially the fact that there’s none of the TV image-clutter to get in the way of your thoughts. There’s something more intimate, confidential about it too. I remember the some of the radio talks that stirred me when I was young. It felt like these brilliant people were speaking to me personally – and, importantly, that they thought I was intelligent enough to understand. You should never talk down to people – you shouldn’t presume too much knowledge either, but there are ways of getting information across without being patronising. After all, I’m sharing something, not imparting it.

3) Recently you’ve been presenting ‘Discovery’ events with orchestras. How important do you think the stories and and history of music impacts somebody’s musical experience?

I know there are some purists who say it should all be about the music itself, and that ‘background’ is a distraction. I’ve never been one of them. I remember being a child and hearing Beethoven’s Fifth Symphony on the car radio and being completely caught up in it, even though I knew nothing about it. But learning about Beethoven, about how he developed personally, about his political and religious beliefs (complicated!), about the Vienna he lived in and the wider world outside has enhanced and enriched my appreciation. Still, when I’m really caught up in the music, I’m that child again.

4) What are your thoughts on how relevant classical music is in today’s world?

There’s a lot of talk of a crisis in classical music – and it certainly isn’t a presence in the wider culture of this country the way it was when I was growing up, which concerns me. Yet look at YouTube. The last time I looked up Beethoven’s Ninth Symphony there were well over thirty versions, and one has had over 100 million views – that’s on a par with Stormzy! And it’s two centuries old! That’s the point of course. We need music that engages directly with the issues of our time, but we also need art to remind us what it means to be human in the larger sense, of the things that don’t change in us, from age to age and from culture to culture.

Here’s a man brought up in a church-dominated autocracy, two hundred years ago, yet for many people he also seems to speak about now. It’s the same with the great rock, pop and jazz that’s survived – they endure because they have something of enduring importance to tell us about ourselves. That rappers are still sampling Bach – three hundred years old – tells us something very important.

5) You’ve published a number of articles and books. How do you go about choosing what to write about? Is it based on your love for a composer/work/genre?

It just seems to happen. I’m talking about something with someone in the business and they say – ‘You should write a book about that’. It’s the best way I think. When it comes to classical music, the composers whom I love best are the ones who have struggled with life, sometimes with serious mental problems, and have found some kind of insight and inner strength. I’ve struggled with bipolar depression throughout my adult life, to the point where I’ve needed hospital treatment. Therapy and medication have helped, and so has having a truly wonderful wife, who’s also a mental-health practitioner, but music has also been vital in finding a way out of darkness – in fact I think there was time during my teens when it was the only thing that helped me stay upright.

One of the wonderful things about the response to How Shostakovich Changed My Mind has been discovering how many people have had similar experiences with music, and how in some cases my book has reassured them that they weren’t wrong to turn to dark music to help them make sense of their own pain.

6) Your book How Shostakovich Changed My Mind is a truly interesting read, and I find that I have similar relationship with the music of Gustav Mahler. For those who haven’t read the book yet, can you describe it in a few sentences?

I’m interested that you mention Mahler. He’s important to me too, and for similar reasons – though for me he’s more connected with the ‘elevated states’ (sometimes rather alarming) of the bipolar condition than the depressive. The book’s really about two things:

1. Why is it that human beings need dark, tragic music? Escapism and distraction can be wonderful, of course, but there are I times, I think, when we need to confront our inner darkness, and great music can help us do that in a structured and safe way – and lots of other helpful things too.

2. I wanted to say ‘Don’t despair. I’ve been through some terrible mental experiences, but music is one of the things that has helped me find my way back from misery to meaning. One of my favourite Nietzsche quotations: ‘Without music, life would be a mistake’. I wanted to say, but music shows us that it isn’t a mistake.

7) When conducting talks on classical music, how do you approach the tone of the talk? Do you go to change people’s minds, challenge people’s perceptions, teach people new things, or all of the above!?

That’s an interesting question – it’s not one I tend to ask myself, believe it or not. What I really want to do is, share something I love with people who either love it or want to understand it. One thing great music can show us is how truly extraordinary the human mind is – not just the minds of the geniuses who created it, but also the minds anyone who engages with this music. Bach couldn’t raise us to great heights if we didn’t have the potential to soar within us.

I remember once after one of my talks, a woman came up to me and said, ‘You make me feel I’m more intelligent than I though I was.’ I replied, ‘You are more intelligent than you thought you were!’ We can carry such low opinions of ourselves around for years. Great music can make us realise we’ve underestimated ourselves.

8) Can you tell us about some of your exciting upcoming events you have booked in?

The next big thing is a series of pre-concert lectures for the Amsterdam Mahler Festival in May – beautifully timed to coincide with my new book, The Eighth: Mahler and the World in 1910, which comes out in March. I some ideas for a couple of new books which I’m discussing with people at the moment, and I’m writing a string quartet for the Carducci Quartet. Also my Clarinet Quintet, Angel’s Arc, has its American premiere in New York in November, with a brilliant young clarinettist named Alexander Bedenko. Can’t tell you how excited I am about that! 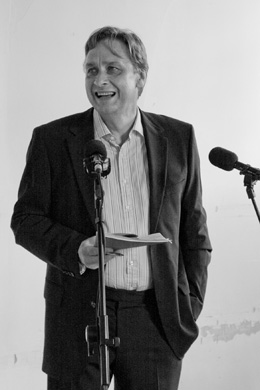