Musical Beasts and Where to Find Them

Throughout childhood, my parents would find me warbling to songbirds, serenading cats or performing sonatas to chickens. I harboured hopes that a lark might land, Snow White style, on my outstretched hand and perhaps sing me a little something. Twenty-five years later, I feel validated watching Temper and Qurious, a duo of piano playing dogs, demonstrating their skills at the keyboard. The question is: are our fellow earthlings really musical or is it just wishful thinking? 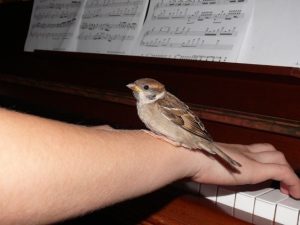 Dan the Dog and friends

Dogs are our longest serving animal allies. Domesticated around 20,000 years ago, faithful Fido and his forefathers have been listening to our music from medieval madrigals through to Despacito.

Naturally some lucky pooches had composer owners. Ethel Smyth’s St Bernard cross, Marco, enjoyed “lying on the pedals of the seldom silent piano” and was admired by both Brahms and Tchaikovsky.

Richard Wagner, a famously fiery individual, respected the musical opinion of his dog Peps far more than that of his critics and edited pieces depending on Peps’ reaction.

Legend has it Dan, the bulldog with his own Enigma Variation, had such a musical ear that he would growl at out of tune choir members!

When dogs howl together their famously sensitive ears help consciously pick a note which none of their fellows are singing. This results in some seriously discordant sounds – I am sure that Charles Ives would’ve approved.

Next up are our feline friends. Perhaps best known in the classical music world is Domenico Scarlatti’s cat, Pulcinella. This moggy walked across Scarlatti’s harpsichord thus creating the theme for his popular piece, the Fugue in G minor.

Cats purposefully playing the piano is a rare but not unheard of phenomenon. Check out Nora the piano playing cat whose music making has actually been sampled by composers. She appears to improvise and even duets with her humans.

The actor and amateur pianist Anthony Hopkins posted a tweet of himself playing to his cat Niblo, who certainly seemed to be enjoying himself.

My own childhood cats would flee the room at the first sound emitting from my oboe; but then, so would the rest of my family members!

Parrots, along with bats, elephants, seals, cetaceans, songbirds and hummingbirds, are able to do vocal learning. In other words, they can mimic sounds. Since pet parrots spend a lot more time with humans than the average whale or bat, they have a better chance of learning our music.

One particularly talented parrot, Chiyo, sings Mozart’s Queen of the Night aria. Although her vibrato might not appeal to the stricter period performance enthusiasts this interpretation is impressive nonetheless.

Male humpback whales, whose subsea song wasn’t discovered until recently, have their own music culture. It may sound to me like Chewbacca performing Webern but apparently the melodies of these singing cetaceans are passed on, developed and even influence others as they travel thousands of miles of sea. 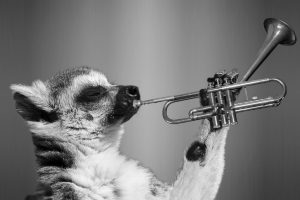 Not all performers are so huge and loud. The Asian corn borer moth emits an ultrasonic song to its mate so soft that it can’t be heard more than 3cm away. Sound sweet? Don’t be fooled. This Don Giovanni of the insect world is actually impersonating a predator to keep its mate frozen in fear. Creepy!

Regardless of animals’ original purpose for their music-making, humans have been inspired by their efforts for centuries. Composers have painstakingly notated birdsong, for example Messiaen’s Oiseaux Exotique. Also Beethoven’s trio of cuckoo, nightingale and quail (played by clarinet, flute and oboe) at the end of the 2nd movement of his Pastoral Symphony.

Rather than copying animal soundscapes, some composers used them more as inspiration. For example, Saint Saëns’ Swan, which would have been much less popular I’m sure, if the cello had accurately imitated the swan’s hissing.

A Question of Intelligence

The question remains whether animals appreciate music or just accidentally stumble on a keyboard, parrot back melodies or paw out notes in exchange for treats? Even animals not renowned for their intelligence, including pigeons, goldfish and sparrows, can distinguish between Stravinsky and Bach. Incidentally only the java sparrows showed a preference and they chose the Bach. 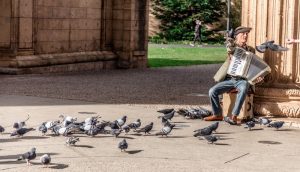 A quick note about those living things on the earth which have no brain whatsoever (no viola player jokes please). I’m talking about plants. Would playing some Mozart help plants flourish? The California Academy of Sciences answers with a resounding “No, music will not help plants grow—even classical”

Some research suggests that classical music enriches the lives of other animals. Here are some examples:

– Parrots repeatedly pressed a button to enjoy music either preferring pop or classical!

Most animals seem to react positively to music which uses the tones and pitches of the animal themselves. Several zoomusicologists have studied and recorded the species’ sounds then arranged them into pieces especially designed for these creatures.

What this Means for Pets

Music can have a therapeutic effect on dogs. Experiments in kennels found the most relaxing choices are reggae and soft rock, although classical hits under 100 bpm are also helpful.

Our feline friends are quite individual in their taste in music. Cats were particularly calmed by the music of George Handel and Barber’s Adagio for strings. This proves what most of us have always guessed: that cats are connoisseurs of the finer things in life. 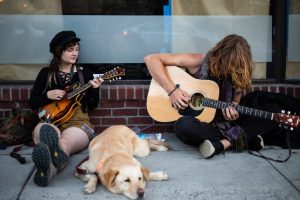 It seems the mysterious, emotional effect music has on us can also be experienced by our animal friends. It is important to remember that, just as I prefer Bach to Borodin, your cat, rat or parrot might have opposing views.

I have the radio on and am looking into the eyes of my Labrador Parsnip. I’m 100% certain that her loving gaze has nothing to with us sharing in the beauty of Debussy’s piano music, and everything to do with the digestive biscuits resting next to my cup of tea. Perhaps I should put on some reggae?

Mary is a classically trained oboist and spends most of her life playing, teaching and travelling around the country while listening to audio books. She works with orchestras such as The Hallé, the City of London Sinfonia and BBC Ulster Orchestra. Having spent her childhood in rural Aberdeenshire she now lives in Alderley Edge with her husband, conductor Ben Gernon, and their golden Labrador, Parsnip. 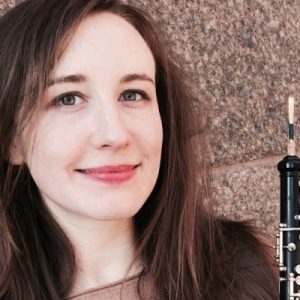