Composed between 1894-5, Richard Strauss’ Till Eulenspiegel’s Merry Pranks is one of his most popular tone poems. The story behind the music is based on the pranks and tomfoolery of the German peasant folk hero Till Eulenspiegel. Known as being a rogue mocker of authority, Till is one of the most adventurous figures in German folklore. His string of pranks was usually at the expense of those higher up in society, this providing both entertainment and social satire.

“Till Eulenspiegel’s Merry Pranks is an anomaly in Strauss’ archive of music. From the satiristic writing to the lack of a detailed programme, the piece is dramatic, humorous and has bags of charisma. Strauss wrote in short about his lack of programme:

“It is impossible for me to furnish a program for Till Eulenspiegel; were I to put into words the thoughts which its several incidents suggest to me, they would not suffice for the listener and might even give offence. Let me therefore leave it to my hearers to crack the nut the rogue has presented them.”

The piece, therefore, embodies the actions and character of Till Eulenspiegel, with the music telling the stories. Strauss admitted later on that the final ‘scene’ of the tone poem does represent Till’s capture, trial and hanging. 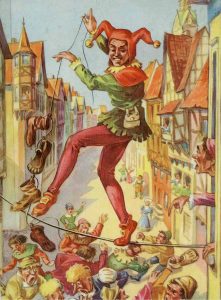 A depiction of Till Eulenspiegel

Opening with a ‘Once Upon a Time’ theme, the picturesque introduction gives you the fairy tale atmosphere. The famous horn theme plays out, and subsequently returns throughout the piece on various instruments. The next scene sees us follow Till through the countryside as he rides a horse through a market. Knocking stalls over, poking fun at the inherently strict Teutonic clergy (represented by the violas), flirting with young women (portrayed by the first violins) and mocking the serious academics (shown by the bassoons), Till’s tomfoolery is presented in a range of different ways.

Strauss’ rich orchestrations, quick changes in time signature and character, plus his character study of Till really makes this music pop. The music moves between being quirky, romantic, bombastic and thrilling as the different scenes play out. The character of Till is laid out for all to see in this piece, with his quick charm and humour popping in and out of the texture.

The music suggests an end to his tricks as he mounts his horse to ride off somewhere else. A repeat of the opening theme can be heard once more with a climax being built up. Straight after the climax the mood suddenly changes into a solemn funeral march. As legend goes, Till was captured and sentenced to death for blasphemy. Always the joker, Till tries to get out of his sentence by cracking witty remarks and charming the headsman. However, his charm doesn’t work this time, and the music depicts his hanging. Strauss uses the D clarinet to represent Till’s journey up the gallows and tied up for hanging. A drum roll anticipates the inevitable and the distorted brass and wind signify Till’s death screams.

This scene is very thought-out by Strauss, with the pizzicato strings resembling the snapping of Till’s neck as the noose reaches its full extension. The illustrative writing here is so effective and really takes you on a journey through all sorts of feelings. After the hanging, there is a moment of silence before the ‘Once Upon a Time’ theme from the introduction is heard. Some have suggested that Strauss placing this theme here to end the piece says that someone like Till Eulenspiegel can never be destroyed. Perhaps physically, but certainly not spiritually. The final musical joke ends this illustrative tone poem.

Richard Strauss’ Till Eulenspiegel’s Merry Pranks takes the listener on a wild ride through the stories of Till Eulenspiegel. From his naughty tricks to his flirtatious character, Strauss embodies this character and lets the listener decide what they think the music is depicting. The dramatic funeral scene is powerful and the reprise of the opening theme is significant and shows Strauss’ deep understanding of what these stories are all about.

Eric Whitacre ‘i carry your heart’: I Am Never Without It