John Rutter ‘The Beatles Concerto’: A Homage to Romanticism

Although largely known for his choral and vocal works, John Rutter has also composed an interesting collection of orchestral works. His three movement concerto for two pianos: The Beatles Concerto, is based on various Beatles songs. The style of this work is reminiscent of the romantic and early 20th Century eras, where the grand piano concerto form was highly valued and largely enjoyed by the masses. Rutter’s concerto was composed in 1977, and the background to the story is just as interesting as the work itself.

The idea for The Beatles Concerto wasn’t actually from Rutter, but from Peter Rostal and Paul Schaefer (also known as the piano duo, Rostal & Schaefer). Rostal remembers the first time this idea came to him:

“The idea of creating a ‘Beatles Concerto’ for two pianos and orchestra occurred to me during a sleepless night early in 1977. This was partly because I loved the Beatles’ music, and along with my piano duo partner, Paul Schaefer, we often included our own arrangements of their songs in our two-piano recitals anyway. However, it also seemed to me that several of the tunes were not simply beautiful melodies, but several (eg ‘Eleanor Rigby’, ‘Can’t Buy Me Love’ , etc) incorporated motifs that had the potential to be developed within the structure of a large-scale classical concerto. It also seemed natural that certain song, such as ‘The Long and Winding Road’ and ‘Something’, could sound wonderful int he grand romantic concerto style of Rachmaninov or Tchaikovsky.

When I awoke, I telephoned Paul with the idea, and he was equally enthused. The obvious collaborator had to be John Rutter. We both loved and admired his music, he and Paul had grown up together as schoolboys at Highgate school in North London, and John had already written many marvellous orchestrations for us anyway.

Happily, John was willing to rise to the challenge and, in my opinion, created a brilliant work. He also entered into the fun by, for example, making sly references to other popular concertos – eg the Grieg and Chopin E minor concertos in the transition from ‘Here, There and Everywhere’ to ‘Something’, in the slow movement.”

The concerto was thus premiered in June 1977, as part of the BBC International Festival of Light Music. The BBC Radio Orchestra performed the work with Robert Farnon as the conductor. Since that premiere performance, the concerto has been taken around the world and has been performed in venues such as the Hong Kong Coliseum and Domain Park in Sydney, Australia. Further to this, the trio had the concerto recorded for the original Beatles label – EMI Parlophone – at the Liverpool Philharmonic Hall in 1979. The most recent recording of the concerto is from 2003, where the Royal Philharmonic Orchestra were conducted by John Rutter himself. Rutter had this to say about the project:

“‘The Beatles Concerto’ still makes me smile. My old friends Peter Rostal and Paul Schaefer offered me what must be the most unlikely challenge of my composing career when they asked if I could create a grand romantic-style concerto for two pianos and orchestra from Beatles songs. As a Beatles fan, I accepted the challenge, but gratefully made use of three of Peter and Paul’s own two-piano arrangements: these appear in the first movement, where the piano parts in the sections based on ‘Eleanor Rigby’, ‘Yesterday’, and ‘Hey Jude’ are theirs, not mine.

After that, I took off on my own, and hugely enjoyed contriving cascades of chromatics, armfuls of arpeggios and deluges of double octaves, all shamelessly plundered from the great masters. The best part of it all was that I didn’t have to play it: that’s a finger-breaking task I have happily left to Peter and Paul, who have never complained. But let’s not forget that there is an underlying tenderness in so many Beatles songs; this comes to the fore in the second movement, which is based on one of the loveliest of them, ‘Here, There and Everywhere'” (All quoted material sourced from 2003 interview with Rostal, Schaefer and Rutter). 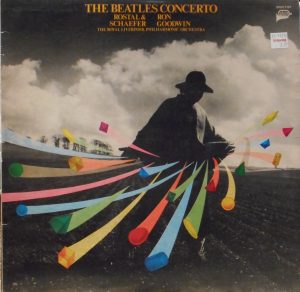 As aforementioned, the work is structured like a romantic concerto would be: three movements in a loosely fast-slow-fast set up. The use of two pianos for this double concerto makes it even more grandiose, which really sets up the style that Rutter was aiming for with this work. Each movement is around 8 minutes in length, with the first movement fitting the most Beatles songs and melodies into it.

This movement uses both arrangements from Rostal and Schaefer, as well as Rutter’s own creative and imaginative orchestrations. The opening fanfare is based around the main melodic line from ‘She Loves You’. Largely this movement is based around the style of Rachmaninov, with Rutter’s employment of large virtuosic interludes really standing out here. The segue into ‘Eleanor Rigby’ is strong and determined, and although this starts quite simply, as the texture builds the dialogue between the pianos and the orchestra begin to flourish. This sets up a natural segue into ‘Yesterday’, which brings the driving force down from the last section. The lyrical arrangement of this song flows through the orchestra and the pianos, making it a highlight of this movement.

The pianos start with the simple melodic lines and then come apart to apply variations onto the theme. There are a few occasions in ‘Yesterday’ where they are in counterpoint with one another, and the melodic line is given to the cor anglais. The cascading scalic runs and very obvious parallel octaves are highly reminiscent of Rachmaninov and his large and dramatic style of piano concerto. There is a brief interlude where we hear a snippet of ‘All My Loving’, however this quickly moves to echoes of ‘Eleanor Rigby’.

The main themes from ‘Eleanor Rigby’ are played by various parts of the orchestra, with the solo pianos acting as harmonic decoration. This then leads to a delicate arpeggio by one piano which slowly leads into ‘Hey Jude’. The start of this arrangement feels nostalgic and with one piano playing the main motif, and the other playing fast scalic lines, there is a real sense of a climax building. The build of dynamics leads to the orchestra entering again after over a minute of the soloists playing without any accompaniment.

The final minute of this movement reaches such a large romantic climax that you are transported to your favourite piano concertos from a hundred years ago. The silent pause, which then leads to a full tutti section packs a real punch, and the huge climax at the end echoes the main theme from ‘Hey Jude’, which then resolves with a ‘typical’ end for a first movement of a concerto.

Beatles songs used: ‘Here, There and Everywhere’ – ‘Something’

The second movement of the concerto is a stark contrast to the previous movement due to its tenderness and change in atmosphere. The movement as a whole plays out very similarly to that of a romantic second movement – slowly and full of passion. Rutter’s delicate but effective arrangement of ‘Here, There and Everywhere’ brings a real sense of serenity to the work, with the pianos being largely chordal for a proportion of this section. The sparse accompaniment in this movement also highlights the soloists, making their decorated melodies the focal point of the movement.

The melody segues into ‘Something’ with the use of a chromatic line, which is certainly taken from Chopin or Grieg piano concertos. This is a technique often used to seamlessly segue into a new theme or a new key. This leads to a climax which flourishes into the melody of ‘Something’. The leading line into this song is rather agitated, which makes the move into ‘Something’ all the more relieving. The tempo picks up more, but the delicate nature of the movement remains. The reflective end to this movement is rather poignant, which sets us up for the finale movement.

Beginning with an expected dramatic burst of flourishes from the orchestra and soloists, the music soon settles into an arrangement of ‘Can’t Buy Me Love’. The modal feel at the beginning accentuates the cascading melodic lines of the song, which creates that grand feeling.  The middle section slows down a lot to unfold a beautiful rendition of ‘The Long and Winding Road’. The strings, horns and soloists are really utilised in this section, with Rutter’s orchestrations closely shadowing the original Beatles orchestrations.

A forceful stab from the orchestra takes us back into a sporadic arrangement of ‘Can’t Buy Me Love’. This recap section leads into a virtuosic cadenza, where the two pianos lead the music back in to an interlude. The climax begins to build once more, and a brass fanfare leads into an elongated double piano run across the span of the whole instrument, whilst beginning to slow down.

A burst of colour flourishes across the orchestra as a recap to ‘The Long and Winding Road’ is played. There is a real sense of romanticism in this section, with long and luscious melodies being played by the strings and the solo pianos. The soaring melodies are all leading to the final stretch of the concerto which out of nowhere picks up speed.

There is a flying visit to the melody of ‘Hey Jude’, before the pianos begins their fast and intricate scalic runs and the orchestra begin to line up the harmony for the final bars. The concerto ends with a classic mix of stabs, dramatic runs and a tonic-dominant-tonic last bar, which is led by the timpani and brass. This grand ending is idiosyncratic to the romantic piano concerto style, with composers such as Rachmaninov and Tchaikovsky being very well acquainted with these techniques.

This unique concerto is full of twist and turns, and although Rutter essentially composed a mock-Romantic concerto, the underlying music is very much in the spirit of The Beatles. Rutter’s exploration of this style, as well as the piano as a solo instrument is a testament to his research, imagination and musicality. The Beatles Concerto proves how timeless the music of The Beatles is and always will be.