Cindy McTee was born in 1953 in Washington. Her father played the trumpet and her mother played the clarinet, so from an early age, McTee was involved with music. By age six she was receiving piano lessons, and her teacher at the time encouraged her improvisation techniques, which later helped her composition career. When she was older, she began taking saxophone lessons with her mother.

She first studied music at Pacific Lutheran University – graduating in 1975. She went on to complete a master’s degree at the Yale School of Music (1978) and then she completed her PhD at the University of Iowa. Whilst studying at Pacific Lutheran University, she met Polish composer, Krzysztof Penderecki, who struck a deal with her that if she taught English to his children, he would offer composition lessons. She also spent a whole year living with the Penderecki family in Poland. She learnt about orchestration, counterpoint and other useful twentieth-century composition techniques. 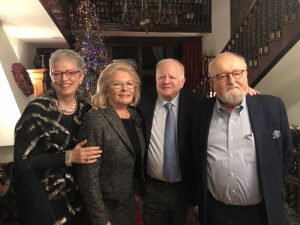 McTee then began to teach at her undergraduate alma mater in Washington. In 1984 she joined the arts faculty at the University of North Texas. McTee has won awards for her music including the ‘Elaine Lebenbom Memorial Award’ (the Detroit Symphony’s most prestigious award). She has also received fellowships from Guggenheim, the American Academy of Arts and Letters and a Composers Fellowship from the National Endowment for the Arts.

Adagio for String Orchestra was composed in 2002 as a commission from the National Symphony Orchestra. McTee says this about the work:

“Adapted from my Agnus Dei for organ in the wake of events following the horror of September 11, 2001, the Adagio became the second movement of my Symphony No.1: Ballet for Orchestra. It was commissioned by the National Symphony Orchestra – music director, Leonard Slatkin – and made possible by the John and June Hechinger Fund for New Orchestra Works.

The Adagio gradually exposes a hauntingly beautiful melody from Krzysztof Penderecki’s Polish Requiem (Ab, G, F, C, Db, Eb, Db, C). A falling half-step and subsequent whole-step empahsize the intervial of the minor third. With occasional references to Samuel Barber’s Adagio for Strings, the work’s harmonic language reflects my interest in using both atonal and tonal materials within the same piece of music.

All night have the roses heard

All night has the casement jessamine stirr’d

To the dancers dancing in tune;

Till a silence fell with the waking bird,

And a hush with the setting moon.

The work begins very quietly with quite a static feel. The cellos play a moving motif, which is then answered by the violins. The harmonics heard in this introduction are very haunting and this creates an eerie atmosphere. The emphasis on the minor third interval is very prominent in this section. There are a lot of dissonances heard, with a lot of harmonics crossing paths. The timed silences are incredibly effective and they make the more climactic sections very bold and spine-tingling.

You can hear the odd passage in homage to Barber’s Adagio for Strings, however, McTee brings the familiar motif into a new light, and she takes it somewhere new. There is a very dark and eerie feel to the work and the fluctuation between atonality and tonality is very pertinent. Again, McTee’s very clever silences are placed so that she builds your emotions up with the music, but then she breaks them down to create a much more dramatic effect.

The strings, at times, play in unison, which unites the ensemble together musically. However, a lot of the time they are working in polyphony, so the texture is very rich, but also busy. Also, McTee writes the cellos in quite a high octave, which brings a lovely warm and woody timbre to the mix of beautiful string sounds. The sound world that McTee is painting with this work is incredible, and the way she develops the main, very simple motif is exceptionally ingenious.

This work is emotive throughout, which, in turn, makes it a very intense piece of music to listen to. The work is very reliant on the minor third interval which brings a certain sadness, but also musical colour to the work. The use of suspensions is also very effective as it allows McTee to create a chain-like reaction to the music. With one section starting a developed motif, and then other sections then following suit.

The work ends with an atonal motif, which is accompanied by the lower strings playing a very static pedal note. The upper strings repeat this motif, whilst gradually getting quieter, before dying away into silence.

You might also enjoy… Toru Takemitsu: Requiem for String Orchestra