John Barry ‘Moviola’: A Homage to the Movies

Born in 1933 as John Barry Prendergast, the budding young musician worked closely with film from a young age. His father owned a cinema in York, and it was here that his love for film music was born. Barry undertook his national service with the British Army, and here he began to learn the trumpet. He formed a band named ‘The John Barry Seven’ and they would perform to audiences on a regular basis. Through performance Barry became interested in composing and arranging music.

After being noticed by the makers of the first ever James Bond film, Barry was invited to submit a score for the 1962 film Dr. No. As the producers for the film were unhappy with the original score composed by Monty Norman, this meant that Barry eased his way into the film industry very quickly. This relationship between Barry and Eon Productions then lasted for over 25 years. Barry subsequently composed scores for 11 of the James Bond films.

Barry composed and conducted film scores for a number of films including Goldfinger (1964), Born Free (1966), Out of Africa (1986) and Dancing with Wolves (1990). With a career spanning over 50 years, Barry was appointed OBE for his services to music. He received a plethora of awards for his music including five Academy Awards, a BAFTA Award for Best Film Music and one Golden Globe.

Moviola was composed as part of Barry’s broadcast where he conducted the Royal Philharmonic Orchestra as they performed some of his most-loved works. The broadcast was made into the popular album Moviola and Moviola II. The first album sees the RPO perform works from Midnight Cowboy, Born Free, Somewhere in Time and Chaplin. Moviola is the last track on the album, and is perhaps one of Barry’s most popular works.

Composed in 1992, Moviola boasts a luscious style that was quintessential in Barry’s style. The title of Moviola coincides with the film theme, with it referring to the first device that allowed film editors to watch the film whilst also editing it. Moviola encapsulates the bridge between music and film, and who better to conduct the premiere but the composer himself. 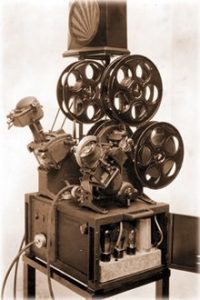 Starting with a warm drone from the lower end of the orchestra, the upper strings play the iconic opening motif that is developed over the course of the work. The deep timbres from the strings playing together creates a very passionate and unified atmosphere. The Romantic style of writing here is something that Barry is known for, but in Moviola it seems that he exceeds even his own lavish writing.

The upper and lower strings continue their musical dialogue, with the lower section beginning the phrase, and the upper section answering with a trickling descending sequence. When the sections unite it becomes much more powerful which comes through in the colour of the tonality that Barry uses. The strings are the main highlight of Moviola, with the winds and brass only adding to the texture and tonality of the work through long notes, occasional interjections and intensity building sequences.

One of the highlights of Moviola has to be Barry’s utilisation of harmony. Although mostly straightforward in terms of basic harmony, there are some suspensions and moving chords that create a slight dissonance in places. This adds to the musical richness and is what gives it that spine tingling feeling at times. The main theme lands on an unconventional chord just before resolving into the relief of the progression. This is perhaps the most obvious time that Barry uses this kind of harmonic language.

The main theme is repeated throughout the piece, with it returning in more dramatic forms each time. Leading up to the big climax of the work, the horns play a counter theme which builds tension and also dynamics to the piece, which creates excitement and emotion for the listener. Barry’s use of percussion here adds to the build up. With rumbling timpani and crash cymbals signalling the climax, Barry’s many years of film composition knowledge comes to the forefront here.

The music begins to come down again before one final repeat of the main theme. This luscious final hark of the melody sees the orchestra come together in perfect harmony as the horns and trombones add to the drama of the work. The upper strings reach their highest register here which signifies the music reaching its pinnacle point.

As the music comes down to a quiet finish the strings and horns hold a chord on the tonic to emphasise the ‘full circle’ moment at the end of the work.

Although not rich in melodic content, the way that Barry develops the simple theme is what makes Moviola such a moving work. The rich and bountiful sounds the orchestra make throughout the entirety of the work pays homage to the many years of service that Barry gave to music, and may his music live on for many years to come.

You might also enjoy… Nigel Hess: Ladies in Lavender

Claude Debussy: Arabesque No.2 Context Composed between 1888-1891, Claude Debussy’s set of two arabesques were some of the composer’s earlier works. The first in particular has remained a popular piece amongst audiences and performers alike. Read more…