Toru Takemitsu ‘Requiem for String Orchestra’: Death is a Part of Life

Toru Takemitsu was born in 1930 in Tokyo. At a very young age, Takemitsu was called into military service. However, during his time in the military, Takemitsu became aware of Western classical music. During the post-war U.S. occupation of Japan, Takemistu was taken ill for a long period of time. Bed-ridden, he took this opportunity to listen to as much Western music as he could on the U.S. network. He said, much later in his life, that he began to distance himself from Japanese music, because it reminded him too much of the war.

Although completely self-taught at this stage, Takemistu began to compose at the age of sixteen, by using influences from the Western classical music he had heard whilst ill. In an interview, Takemistu suggested that music ‘clarified’ his identity, because “after the war, music was the only thing left.” Throughout his fruitful career, Takemistu only studied under Yasuji Kiyose for a brief time, but largely he was a self-taught composer and musician.

As well as his orchestral and chamber works, Takemistu is also remembered for his ideas regarding electronic music technology. In 1951, Takemistu was one of the founding members of the anti-academic group called ‘Jikken Kōbō’ (‘experimental workshop’). This was an artistic group that was established for multidisciplinary collaboration on ‘mixed-media projects.’ Takemistu composed many works throughout this period, and he also composed some works with the aid of electronic tape recording, such as Relief Statique (1955), and Vocalism A.I (1956). At this point, Takemistu’s music was largely kept in Japan and the surrounding area, that was, until the late 1950s, where, by chance, he hit international fame. When Requiem for String Orchestra was premiered in 1957, it was received well.

In 1958, by chance the great Igor Stravinsky heard this work on his visit to Japan. It has been noted that NHK (a Japanese broadcaster), had organised the latest Japanese music for Stravinsky to hear on his visit, and by mistake Takemistu’s Requiem was put on. NHK tried to turn the piece off, but Stravinsky wanted to listen to the end, saying that he admired the work for its ‘passionate writing’ and ‘sincerity throughout.’ After this, Stravinsky invited Takemistu for lunch. Takemistu then received a commission for a new work from the Koussevitsky Foundation, which he assumed had come from Aaron Copland, via Stravinsky’s recommendation. For this commission he wrote Dorian Horizon (1966), which was premiered by the San Francisco Symphony Orchestra, conducted by Aaron Copland himself.

Throughout his rise to international fame, Takemistu’s style gradually developed. He began meeting some influential composers, which deeply affected his music, such as Karlheinz Stockhausen, John Cage and Peter Sculthorpe. More avant-garde compositions such as Waves (1976) and Quatrain (1977) highlight Takemistu’s shift in compositional style. It was around this time, in the 1970s, that Takemistu began incorporating traditional Japanese musical ideas into his compositions. Works such as In an Autumn Garden for gagaku (1973) and A Flock Descends into the Pentagonal Garden (1977) emphasise this effectively. His later works show the dichotomy between Eastern and Western traditions even more so, which is perhaps why Takemistu became such a tour-de-force in the twentieth century.

Towards the last years of his life, Takemistu began to collaborate on an opera with novelist Barry Gifford, and director Daniel Schmid. Whilst writing the plan for the musical structure between 1996-1996, Takemistu passed away in February 1996 due to contracting pneumonia, whilst undergoing treatment for bladder cancer – he was 65. Since his death, Takemistu has often been regarded as one of the most important composers that Japan has ever produced. He was the first Japanese composer to be fully recognised and accepted in the West, and still remains an important figure for younger generations of Japanese composers.

Composed as a tribute to his mentor, Fumio Hayasaka (also a composer), Requiem for String Orchestra highlights Takemistu’s avant-garde style of composition. There has been discussion on this piece and how it sounds very ‘Western’, rather than a mix between the two traditions. Although the tonality and orchestration is very reminiscent of Western culture, it is, perhaps, the atmosphere that is more reminiscent of Japanese culture. The sense of ‘staticism’ and ‘speechlessness’ is very much in the lanes of Japanese aesthetics ‘mono no Aware’.

Described in the novel, The Tale of Genji by Japanese philosopher, Motoori Noringa, ‘mono no aware’ exhibits what is seen as traditional Japanese aesthetic consciousness. ‘Aware’ portrays misery and sadness, ‘mono no’ thus shows the ‘aware’ to the world, usually in the abstract sense. This, in Japanese tradition, represents ‘fleeting beauty’ and signifies a sad, yet unwavering beauty. 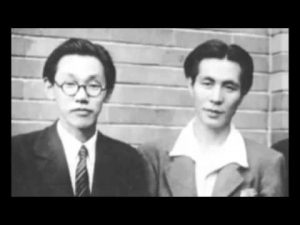 Requiem is in an ABA structure (Lent-Modéré-Lent). The structure adds to the intensity of the work. Starting out quietly, with muted strings, the dynamics gradually appear, and the ensemble sound both hollow and thick with homophonic texture – playing to the idea of ‘mono no aware.’ The passages of crescendo and decrescendos mark the inhales and exhales of a singer, making the work even closer to the listener. Takemistu describes the use of monotonic change of a single note as a ‘River of Sound.’ For Takemistu, the blending of all of these sounds creates a link between them, hence the idea of a ‘river of sound.’

Requiem has a rich tonality throughout, which is accentuated through the largely-homophonic texture, and monotonic changes. The second section (Modéré), is even tenser due to the shift into a slightly faster tempo. The luscious syncopated passages are said to represent the grievances of loved ones. This is emphasised by the changes in texture, with some passages utilising all parts, and others only some of the ensemble.

The final section recalls the opening of the work, however it is shortened somewhat. The recap to the first section is noted to be a reminder of the past, which brings the beauty of sadness. This perhaps represents Takemistu’s struggle for life against illness. The idea of ‘mono no aware’ also runs prominent here, with this quote summing up the work quite neatly:

“Mono no Aware is a sentiment towards nature and life, that life is part of death, and death is a part of life.”

Therefore, one must recognise the truth of the soreness of life (which is momentary), if one may achieve a peaceful mind: a natural realm of eternity. Here is where I believe Takemistu’s Japanese heritage is placed in Requiem. Japanese aesthetics are complex, and yet, when listening to Requiem it all becomes so simple: when East meets West, an eternal beauty can be created.

You might also enjoy… Samuel Barber: Adagio for Strings