This kind of music often has a gradual progression, which is supported by a steady tempo or drone and/or a constant building of harmony. From this came the techniques of ‘Phase Music’ and ‘Process Music’. Process Music, in essence, is when a work abides by strict rules as to how it should be performed (i.e. Reich’s Piano Phase). This often includes extensive notes in the scores from the composer outlining how the work should be staged and performed. Phase Music, however, differs slightly and is more about the addition and shifting of phases, which, in short, can give you an echo effect within the music.

Phase Music was made popular by Reich and his tape music. He began slowly and speeding up the main motifs of compositions, which created a pattern which could then be overlapped, replicated, and then shadowed through the medium of other instruments, tapes, or live recordings.

Reich has become a staple household name in contemporary music and has influenced a wealth of composers including Michael Hedges, Brian Eno and John Adams. Adams had this to say about Reich and his music:

“For him, pulsation and tonality were not just cultural artefacts. They were the lifeblood of the musical experience, natural laws. It was his triumph to find a way to embrace these fundamental principles and still create a music that felt genuine and new. He didn’t reinvent the wheel so much as he showed us a new way to ride” (2010). 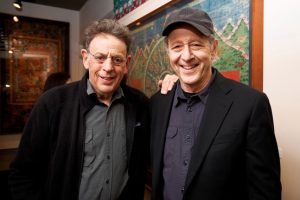 When Reich was in the midst of working on his Phase Music development, he composed the aptly named work Piano Phase. Composed in 1967, the piece was originally composed for two pianos (or piano and a tape). Piano Phase is a landmark in Reich’s career, as it was one of his first attempts at using his phasing technique. Before this work, Reich had composed works such as It’s Gonna Rain (1965), which also used the phasing technique. The main difference between these works is that the earlier compositions that used this technique often relied on a tape, meaning that they were not necessarily performed live.

Piano Phase was composed with the intention to be performed live. It took Reich quite some time to show and prove that a musician can use the phasing technique live if they apply enough serious concentration into the discipline. As Reich did not have two pianos at his disposal, he recorded the foundation part on tape, and then played the motif on a live piano to play mostly in sync with the tape, with some parts not aligning so he could form the basis of the composition. Before concluding with the double piano composition, Reich also wrote a similar work entitled Four Pianos, which was also premiered in 1967. However, the original two-piano version proved to be much more effective.

Lasting between 15-21 minutes, Piano Phase begins with two identical lines of music, which play synchronously to start, but soon they slowly become out of phase with one another. They become out of sync by the slight speed increase of one piano. Although this work has a repetitive nature, the piece can be analysed in three major sections. The first begins with both pianists playing a rapid twelve-note figure in unison. The note pattern is – E/F#/B/C#/D/F/E/C#/B/F#/D/C#. The motif is based around this initial semiquaver cell, which is grouped 4×3, to create the ongoing pulsating feel.

The first bars of Piano Phase

Once one player begins to speed up the notes begin to clash as whilst the first pianist is playing an E, the second is playing an F# and so on. This then creates a sea of different rhythmic variations of the main melodic theme. In simple terms though, this piece is essentially three simple motifs, repeated at different speeds to create the musical illusion of there being some really complex variations of the motif. Of course, playing this live would require the utmost precision and concentration. This process is repeated until it has gone full cycle and the pianos are playing in perfect unison once more.

The second section can be identified by one of the pianists fading out, leaving the first playing the original twelve-note melody alone. The motif is slowly changed into an eight-note motif, which is now grouped 2×4. There is a distinct feel for this new eight-note motif once the second pianist returns, and thus the phasing process begins once more, fulfilling eight cycles. At the end of this section (measure 26), one pianist fades out, leaving the eight-note melody playing.

The third and final section of Piano Phase is perhaps the most simple in terms of the fundamental motif. There is a change in the meter to 4/8, where a melody built out of four notes is created. There are only 4 pitches here (A/B/D/E), instead of 5-7 pitches. This final section sees the last phasing process happen before the pianos return in unison at the end of the piece. It is marked on the score ad libitum for how many times the cycle is played, and on the score, it says between 8-60 times.

Although intended for two pianists, in recent years there have been performances with two pianos and one performer

Piano Phase is a prime example of music that works on a gradual process progression. Reich mentions the idea of change in the process via ‘by-products’ (i.e. the variations within the phases). The superimposition form sub-melodies which are born from echo, resonance, tempo and the subjective perception of the listener.

One of the main attractions to this work is the rhythmic ambiguity, which starts in sync and soon forms into a complex menagerie of rhythms. It is indeed intriguing how these patterns occur in phasing, you may have noticed that the motif is played symmetrically in the first section, which results in identical patterns. This is due to the crossover in the process, which led to these patterns occurring.

Due to the complex performance rules, you can understand why it is not performed live very often. Since its premiere in 1967, it has been famously performed in 2004 and 2016. The performance in 2016 caused quite the stir due to it being disrupted in the first few minutes by some audience members who started clapping and shouting in an attempt to throw the performances off their concentration.

Piano Phase has also been scored for two marimbas, which the idea of one being an octave below the other in live performance. After the premiere of this work in 1967, Reich went on to compose works using similar compositional techniques, such as Violin Phase (1967) and Drumming (1971).