Eric Coates: By The Sleepy Lagoon

Known for being one of the forefront light music composers in the 20th Century, Eric Coates is fondly remembered for his romantic waltzes, powerful marches, and catchy melodies. Composed in 1930, By The Sleepy Lagoon is a short light orchestral work that accentuates Coates’ irresistible musical charm, his famous romantic style, and the English rural pastoral sound. The work is one of Coates’ most remembered works, and it is still used now as the introductory music to BBC’s Desert Island Discs. The inspiration, like many English compositions of this time, was taken from a view that Coates enjoyed near Bognor Regis. His son, Austin Coates describes the experience:

“It [By The Sleepy Lagoon] was inspired in a very curious way and not by what you might expect. It was inspired by the view on a warm, still summer evening looking across the ‘lagoon’ from the east beach at Selsey towards Bognor Regis. It’s a pebble beach leading steeply down, and the sea at that time is an incredibly deep blue of the pacific. It was that impression, looking across Bognor, which looked pink – almost like an enchanted city with the blue of the Downs behind it – that gave him the idea for the Sleepy Lagoon. He didn’t write it there; he scribbled it down, as he used to , at extreme speed, and then simply took it back with him to London where he wrote and orchestrated it.” [Source] 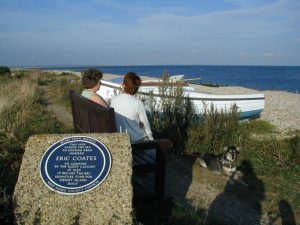 The piece itself is seamlessly orchestrated and incredibly relaxed and very easy to listen to. Coates’ romantic main theme, chiefly played by the upper strings, aim to depict the warm summer’s evening he experienced at Selsey. The opening four bars sets the scene immediately for the listener. There is a sense of upward movement which then slowly trickles down to create a lilt in the melody. If the strings go upwards in the melody, then the winds will accentuate with a descending figure.

The brass are largely muted throughout, offering delicate call and answer phrases with the winds. Coates’ attention to detail is pertinent in this work with subtle notions such as wind trills taking the listener to a rural world. The well-known melody then develops into the middle section of the piece, which is perhaps less well known. Throughout this section the lagoon still beckons, and to me it feels as if this signifies Coates looking away from the scenery, but then quickly averting his eyes back to the lagoon once more.

In 1940, songwriter Jack Lawrence found a reduced version of By The Sleepy Lagoon and wrote lyrics to fit the melody. The song became a collaboration between Coates and Lawrence, and it was soon given to bandleader, Harry James. The romantic lyrics can be found here:

A sleepy lagoon, a tropical moon and two on an island,

A sleepy lagoon and two hearts in tune in some lullaby-land,

The fireflies gleam, reflects in the stream, they sparkle and shimmer,

A star from on high, falls out of the sky and slowly grows dimmer.

The leaves from the trees all dance in the breeze and float on the ripples,

We’re deep in a spell, as nightingales tell of roses and dew,

The memory of this moment of love will haunt me forever,

A tropical moon, A sleepy lagoon and you!

Recording artists such as Doris Day and Dinah Shore have produced famous recordings of this song.The famous melody can be heard throughout the song, with Coates’ charm ringing through.