Camille Saint-Saëns ‘Carnival of the Animals’: A Grand Zoological Fantasy

Camille Saint-Saëns: Carnival of the Animals

Camille Saint-Saëns wrote Carnival of the Animals whilst in a small Austrian village, and he always referred to it as ‘mais c’est si amusant!’ (‘Such fun!’). Interestingly, this piece was never published in Saint-Saëns’ lifetime as he didn’t want it to taint his ‘serious composer’ image, and instead this work was played privately, with the exception of one of the movements – ‘The Swan’. The first private performance was on Tuesday 9th March 1886. 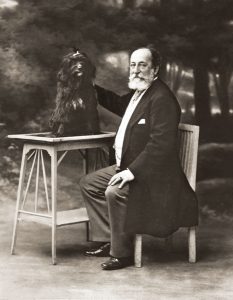 Saint-Saens, Camille with his dog

Carnival of the Animals is scored for two pianos, two violins, viola, cello, double bass, flute and piccolo, clarinet, glass harmonica and xylophone. The pianos play a particularly main role throughout all fourteen movements of this suite, which does borderline a mini concerto form. As the title suggests, each movement is based on a different animal, with Saint-Saëns creating musical connotations for the animals within all fourteen movements. Most are short, however some develop further, with some movements now being performed as stand-alone concert works.

This opening movement is scored for both pianos and strings, and starts with a stately tremolo from the pianos, which sets the scene for the bold strings to enter. To end the introduction both of the pianos play a contrary motion scale and the ensemble end on the tonic chord. The next section, which depicts a ‘royal lion’s march’, is fronted by the pianos, which play a simple march motif. The strings play a simple quaver melody that is embellished by the pianos with trills and simple march figures. The pianos then play a fast-moving triplet theme, that perhaps represents the roar of the lion. The main theme returns in the first piano in a very high octave, which proves the presence of the lion and that the lion is at the top of the social scale in this instance. The movement ends with the ensemble ending on the tonic chord after another ‘roar’.

This movement is orchestrated for two pianos, clarinet, upper strings and double bass. The first fast quaver theme is meant to represent the chickens pecking and the clarinet interrupts to add to this effect. The piano plays a fast trill-led theme which depicts the rooster’s ‘Cock a Doodle do!’.

This movement is very exciting and it creates the image of fast animals running and undertaking every task in the quickest way possible. It is only scored for two pianos, so the tempo is intense between the two players. The pianos play contrary motion scalic runs in octaves, which creates a very sparse, yet effective texture.

This movement is very slow and is the first completely satirical movement of the suite. It begins with the first piano playing a pulsing triplet motif, which drags somewhat to highlight the general movements of a tortoise. The strings then play a very slow version of Offenbach’s ‘Can-Can theme, from his operetta Orpheus and the Underworld. The theme is repeated and then the movement comes to a slow end.

L’éléphant is scored for piano and double bass and it is a rather amusing musical caricature for an elephant. The piano plays a quaver motif in a waltz style and then the double bass plays the elephant solo above this. It is said that this movement is also a take on other composer’s work, namely in this case its Mendelssohn’s incidental music to A Midsummer Night’s Dream. The bass solo within this movement is heavy and of course it is very low, which perfectly represents an elephant’s movements.

Movement six is scored for both the pianos and is a very fun movement. Its main theme is disjointed and jumpy, similar to that of a kangaroos movements. The piece is based around a ‘hopping’ theme, which is in fifths. The motif gradually speeds up and gets louder and then when it descends it does the opposite. This effect makes this motif even more playful and reminiscent of a kangaroo jumping around.

This movement is certainly one of the most famous. It is scored for violins, viola, cello, two pianos and glass harmonica, and is said to be the most musically rich of all the movements. The pianos play a running semiquaver theme, which mirrors the effect that a glissando would make. The main crotchet theme is played by the flute, glass harmonica and is supported by the upper strings. This music is incredibly peaceful, and the runs on the glass harmonica (or glockenspiel) are reminiscent of a dimly-lit aquarium. This movement is incredibly pensive, reminiscent and peaceful.

This movement is only scored for two violins and is the shortest of all fourteen movements. The violins alternate playing either excruciatingly high-pitched notes, or very low buzzing notes. This is to represent a donkey’s ‘hee-haw’. The movement is over before you know it, and its content is based on this one main motif that depicts the donkeys.

IX. Le coucou au fond des bois (‘The Cuckoo in the Depths of the Woods’)

This rather gentle movement is only scored for two pianos and a clarinet. The pianos spans very large chords, which covers a lot of the pianos range, and they play it very softly. To answer this, the clarinet plays a two-note ostinato on C and Ab. This creates a ‘cuckoo’ sound and is automatically recognisable to the ear. On the original score Saint-Saëns directs for the clarinet to be offstage.

This movement is very exciting and is written for strings, pianos and flute. The strings play a tremolo to create a buzzing sound, whilst the flute takes the part of the bird, which Saint-Saëns has written a virtuosic part for. There is a lot of chromatic scales played by the flute, and the movement ends after the flute plays a long chromatic scale upwards.

This movement, again, is a musical joke. The aims here are to show the audience something they would not normally see – a pianist practising their scales. Saint-Saëns goes from C-Eb and the rhythms begin to change in the scales as he modulates upwards. The scales are played more and more out of time as the movement goes on, which represents the arduous feelings towards practising scales. The movement does not end on a resolved chord either – instead it leads us into the next movement.

This movement is scored for strings, two pianos, clarinet and xylophone. Saint-Saëns borrows one of the main themes from his own composition Danse Macabre. He utilises the xylophone and the main theme evokes the image of skeletons moving and playing card games. There are allusions to some other famous pieces such as ‘Twinkle Twinkle Little Star’, which Saint-Saëns makes into a round. Also ‘Au clair de la lune’ and ‘Una voce poco fa’ are hinted at within this movement. Bernstein argues that the musical joke within this movement is that the musical pieces that are quoted are the fossils of Saint-Saëns’ time.

Scored for both pianos and cello, this solo epitomises romanticism and general themes of love. The movement depicts a swan elegantly gliding over the water, and the repeated scalic runs from the pianos create a rolling feel, which represent the swans feet paddling under the water. This movement was the only one that was published whilst Saint-Saëns was still alive, and is now a staple of cello repertoire.

This is the only movement scored for the whole ensemble and it begins with the same tremolo motif played at the start of the introduction. Many of the previous movements of this work are quoted throughout this movement. In true Saint-Saëns style, there are lots of ornamented sections, with heavy use of gliassandos, shimmering scales and trills. The movement ends with six musical ‘hee-haws’ and ends on a full ensemble C major chord.

This suite of music is comical, passionate and takes us on a fantastical zoological tour of the natural world.

Ursula Mamlok: Constellations Context Born on February 1st, 1923, Ursula Mamlok was born in Berlin, Germany into a primarily Jewish family. Her biological father, Hans Meyer, died when she was a baby, but her mother Read more…

John Ireland: The Holy Boy Context John Ireland’s The Holy Boy has seen a huge transformation over the course of 30 years. The original version dates back from December 1913, and was part of Ireland’s Read more…