The American film, TV and video game composer Bear McCreary (1979-) is one of the leaders in mainstream composition. He is best-known for his work on the new Battlestar Galactica (2004-09) TV series, as well as other popular shows such as The Walking Dead (2010-) and Outlander (2014-19). His film soundtrack list is also very impressive, boasting big hits such as 10 Cloverfield Lane (2016) and Godzilla: King of the Monsters (2019).

McCreary has been nominated for over twelve awards for his soundtracks, including winning a ‘Primetime Emmy Award for Outstanding Main Title Theme Music’ for Da Vinci’s Demons in 2013, and the 2009 ‘International Film Music Critics Award for Best Original Score for Television’ for Battlestar Galactica.

McCreary often credits composers such as Elmer Bernstein, Danny Elfamn, Jerry Goldsmith, Ennio Morricone and John Williams as playing a vital role in his development as a composer. This was either through their incredible music for screen, or offering their personal help. McCreary became friends with the great Elmer Bernstein after they collaborated on Bernstein’s original score for Kings of the Sun.

The original Godzilla: King of the Monsters was released in 1956, with an original score from Japanese composer Akira Ifukube. Directed by Terry O. Morse and Ishirō Honda, the film was a heavily re-edited American adaptation of the classic 1954 original Japanese film Godzilla. Referred to as a ‘kaiju film’ – meaning a film that features giant monsters – the remake of the 1956 original was released in May 2019.

Directed by Michael Doherty, with an original score by McCreary, Godzilla: King of the Monsters is the 35th in the Godzilla franchise and the third to be completely produced by a Hollywood Studio. A short synopsis of the film reads:

The new story follows the heroic efforts of the cryptozoological agency Monarch as its members face off against a battery of God-sized monsters, including the mighty Godzilla, who collides with Mothra, Rodan, and his ultimate nemesis, the three-headed King Ghidorah. When these ancient superspecies, thought to be mere myths, rise again, they all vie for supremacy, leaving humanity’s very existence hanging in the balance.

Upon release in May 2019, the film received average feedback from audiences and critics, with many praising its visual effects and musical score. 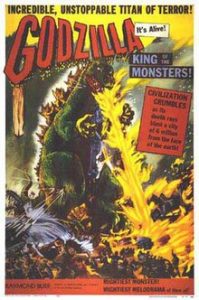 The Main Title features a lot of musicians to create the impact needed for the opening of a Godzilla film. McCreary describes the Main Title as “the most audacious piece of music” he has ever produced due to the extensive use of a full symphony orchestra, choir, taiko chanting and taiko drumming.

The bold Main Title might sound familiar in places for anybody who is a fan of the Godzilla franchise, as McCreary paid homage to the original Godzilla composer Akira Ifukube. The iconic theme can be heard from the off, with the heavy brass proclaiming an earth-shattering sequence before the main string theme enters. McCreary cleverly weaves in Ifukube’s original kaiju monster theme that appeared in the 1954 original Godzilla film. This was a first for an all-Hollywood Godzilla film.

Director Michael Doherty describes the Main Title as a “monster opera” due to its incorporation of the ‘voices’ of the all the kaiju titans. As well as Ifukube’s iconic opening theme, McCreary also pays homage to Yūji Koseki’s immortal theme from ‘Mothra’s Song’.

After the monumental opening sequence, the next kaiju voice is heard through the iconic string melody. McCreary does not simply copy this theme, but he develops it and gives it his own twist. The guttural vocalisations for the kaiju’s Godzilla and King Ghidorah offer a new level of darkness and timbral shaking that makes the music all the more powerful.

The brass are arguably one of the most crucial parts in the Main Title as they also represent the roars of Rodan’s voice, with screaming French Horns and ripping heavy brass below, this presents a frightful introduction for this kaiju.

To start with the vocalisations are heard by an all-male voice group as they chant in traditional Japansese taiko. The hypnotic chanting is supported by a repeated motif played by the orchestra underneath who keep the pace and add to the drama of the chanting. As the voices begin to reach the final climax the voice begin to bend and ascend upwards into the God’s which seamlessly turns into an ethereal female choir. The all-female choir represent Mothra, and this short heavenly ascent is a like a sigh of relief, before the music descends back into kaiju hell.

The opening brass proclamation is heard once more, and the Main Title ends with another short chant from the male voices before the final percussive hit finishes the piece.

This epic opener for the remake of Godzilla: King of the Monsters is the perfect opening for a sci-fi thriller such as this. With a range of forces to use, McCreary utilises the full symphony orchestra, plus extra heavy brass and percussion, as well as two highly effective choirs. This dynamic Main Title perfectly sets the destructive and hell-like scene for the film to continue. With McCreary’s homage to Ifukube and Koseki, this nostalgic, but rebooted Main Title for this film strikes the perfect balance between old and new to create an absolutely epic platform for the God-sized superspecies to battle and rise again once more.

You might also enjoy… John Williams: Theme to Jaws