Antonín Dvořák: Symphony No.9 (‘From the New World’) 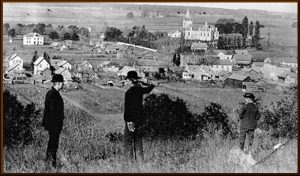 The nickname ‘From the New World’ or ‘New World Symphony’, as it is commonly referred to, comes from Dvořák explaining that the symphony offers ‘Impressions and greetings from the New World.’ It is common knowledge that Dvořák’s main inspirations for his Ninth Symphony were Afro-American songs. The composer had discovered these during his first few months in New York. As a composer who often drew inspiration from his homeland, folk music and traditional European musics, Dvořák essentially combined this new music he had found, with some of his European music expertise.

He took much inspiration from American spirituals, with one of the main examples of this being the partial quotation from ‘Swing Low, Sweet Chariot’ in the opening movement. There has been much debate as to whether Dvořák actually used direct quotations from these Afro-American songs. Dvořák, in an interview with the New York Herald stressed that:

“It is merely the spirit of Negro and Indian melodies which I have tried to reproduce in the new symphony. I have not actually used any of the melodies.”

The argument for the potential quotation of ‘Swing Low, Sweet Chariot’ is still debated today, as the melodic similarities cannot be regarded as coincidence. Nevertheless, Dvořák’s use of syncopation, pentatonic scales and folk melodies highlights his ambitions to make his mark in America in the 1890s.

Set in broad sonata form, the opening movement of Dvořák’s Ninth Symphony begins with a slow introduction. It has been suggested that the slow, even nostalgic, opening reflects Dvořák looking back to his homeland, however this soon dissolves with the bold themes ‘from the new world.’ The slow introduction foreshadows some thematic material later on in the movement, in particular the main theme that Dvořák often goes back to.

There are two very distinctive techniques that Dvořák uses throughout this movement. The first being the extensive use of call and response themes between the sections of the orchestra. Whether it is a direct call and response section, or if it’s foreshadowing, this movement is full of communication between the instruments. The second technique is syncopation. Whether it is in the accompanying parts, or within the main melodic lines, Dvořák’s extensive use of syncopation shows his nod to both Afro-American music, and also European folk music.

The returning bold fanfare-like motif is utilised by the lower end of the orchestra, with the brass adding tonal colour to this. It appears more as the symphony progress, albeit in various forms. It often appears at key points in the music, be it key changes, section movements and so on. The second main theme of this movement is based on a folk melody, with the woodwinds leading on this motif. It certainly asserts the American-Czech character of the symphony as a whole. I

ts strong minor key foundation and narrow melodies reflect Indian folk themes that Dvořák aimed to utilise throughout this work. Cleverly, Dvořák transforms this theme in character and melody range and it almost becomes like a Czech polka dance – which shows his firm roots in his style, even though he was supposed to be composing ‘for America.’ The impressive coda showcases the brass and timpani, who sore above the orchestra for the main climax of the whole movement. The main melodic phrase is proclaimed throughout the orchestra, before this movement comes to a close.

The incredibly famous second movement begins with a succession of chords from the woodwind section. The harmonic progression goes between E major/Bb major/E major/Db major/Bbb major/Gb minor/Db major. The strings are muted, whilst the cor anglais sings out the broad solo melody. Initially, this main theme was scored for a solo clarinet, however it seems that this was later changed as Dvořák preferred the sound of the cor anglais as it sounded more like a human voice singing.

There are hints of Dvořák using the pentatonic scale within this movement, which emphasises his use of the spirituals. The middle section sees a shift to C# minor, with a reinforced funeral march leading us into the quasi-scherzo section, which shifts to C# major. This vast change in character gives light and shade to this overall very exciting movement. The end also incorporates several past thematic ideas, including the main theme from the first and second movements, as well as the introductory chords of this movement reappearing at the end.

The opening bars are certainly reminiscent of Beethoven’s Scherzo from his Ninth Symphony. The fast pace and march-like style creates a light and bouncy style that is emphasised by the strict 3/4 time. The idyllic middle section acts a trio of sorts within the movement, and the stark contrast here is very effective. The build up of texture, dynamic and melodic material at the end sets us up for the Finale movement. The closing theme sees the closing theme from the first movement make a return as well.

Perhaps the most impressive of all the movements, the Finale of Dvořák’s Ninth Symphony is bold, powerful and full of musical treasures. This movement is a culmination of movements past, as well as quite a lot of new material also being presented. Some have suggested that all of this melodic material could be telling us one of two things: either Dvořák is aching for the ‘Old World’ (his homeland), or he is seeing the excitement in the ‘New World’ (America and beyond).

The dichotomy between the Czech-inspired melodies and the Afro-American spirit of the work is certainly an interesting talking point of this symphony. The development of some melodic material in this movement can be seen through the excessive use of triplets, dotted rhythms and strong accents. This juxtaposes the idyllic sections, which are often slower and led by the woodwinds.

Material from the previous three movements are distinctive and pivotal to the development of this section, which emphasises just how creative Dvořák had become in his career. The formidable climax at the end is huge, and you can hear it expanding due to the brass and staccato strings. After the fanfare, the dramatic change to the first movement chorale is shocking and stops you in your tracks.

The final grinding climax in the coda proclaims the impressions from the new world, whilst also staying loyal to the old. The final chords is interesting because the orchestra finishes playing, but the upper winds keep holding their final chord, which creates such a unique atmosphere.

You might also enjoy… Ralph Vaughan Williams: Symphony No.4

Such a sensitive performance of the Dvorak, and Celibidache conducting from memory and with such visible feeling! Beautiful Cor Anglais solo in the 2nd movement. And such quietness achieved by so many players – wonderful. On the whole a little slower than many performances, but you can hear every note, and it gives the sensation of the wide open spaces in the composer’s time and the atmosphere I think he wanted to conjure up – as distinct from the rush of today!

Claude Debussy: Arabesque No.2 Context Composed between 1888-1891, Claude Debussy’s set of two arabesques were some of the composer’s earlier works. The first in particular has remained a popular piece amongst audiences and performers alike. Read more…