Edward Elgar’s Variations on an Original Theme (‘Enigma’) – more popularly known as Enigma Variations – won him international recognition after many years of not being that well known to most. It was composed between October 1898 and February 1899 and is comprised of fourteen variations on the original Enigma theme. The theme came about in 1898 whilst Elgar was at the piano improvising. His wife Alice was listening and commented on how good the theme was sounding. Elgar began varying the theme and said “Powell would have one this. Nevison would have looked like this.” He asked Alice “Who does this remind you of?” to which she replied “why, that’s Billy Baker going out of the room!”.

Elgar started thinking more about this idea and thus decided to create a set of variations on an original theme. Elgar commented to his friends about this new collection of works:

“The Variations have amused me because I’ve labelled them ‘em with the nicknames of my particular friends. I’ve written each one to represent the mood of the party.”   The first official programme notes read as follows:   “This work, commenced in a spirit of humour & continued in deep seriousness, contains sketches of the composer’s friends. It may be understood that these personages comment or reflect on the original theme & each one attempts a solution of the Enigma, for so the theme is called. The sketches are not ‘portraits’, but each variation contains a distinct idea founded on some particular personality or perhaps on some incident known only to two people. This is the basis of the composition, but the work may be listened to as a ‘piece of music’ apart from any extraneous consideration.”

The title ‘Enigma’ was added to score only a month before the premiere, with Elgar commenting that the theme represented “the loneliness of the creative artist.” The mysterious reasons behind the title has become an enigma in itself, as it is still discussed today. The Musical Times reported in 1900 that “Mr Elgar tells us that the heading ‘Enigma’ is justified by the fact that it is possible to add another phrase, which is quite familiar, above the original theme that he has written.” The true meaning of the title will never be known, as Elgar never revealed the secrets behind the Enigma. 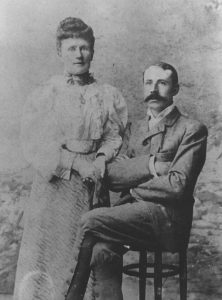 Although fascinating, the work is a strong stand-alone work without all autobiographical and mysterious enigma stories. It’s sparkle comes from Elgar’s impressive orchestral colours, textures and harmonic language. The cleverness in its structure celebrates Elgar’s autobiographical links, as well as creating astonishing melodic content that oozes originality.

The original Enigma theme is slow, wistful and led by fluctuating violins as they play the theme. The basis of the theme features intervals of falling thirds, fourths and sevenths. The violins open in a sultry G minor, which soon shifts to G major as the basses and woodwinds take over the theme, which glides straight into the first theme.

Elgar’s wife Alice is portrayed in this first variation. With a serene expansion of the theme, the upper strings take hold of the melody. Elgar’s subtle woodwind writing is also a feature of this movement, with the flute and clarinet in particular playing a big part in the lead up to the gushing romantic climax.

Hew David Stuart-Powell was a pianist who played in a trio with Elgar. The diatonic runs over staccato strings and winds shows the humour in this movement.

Richard Baxter Townshend was noted for often playing old men in am-dram productions. This is represented by the shaky-voiced bassoon. Elgar commented on the “skittish charm” of this movement, for his friend Richard.

The shortest of all fourteen variations, the fourth depicts the country squire William Meath Baker. The music shows him reading the day’s plans, with guests banging the door behind him. This is who Alice was referring to when she said to Elgar “why, that’s Billy Baker going out of the room!”

Richard Penrose Arnold was an amateur pianist and son to poet Matthew Arnold. The dialogue Elgar creates between the winds show the witty conversationalist that Richard was.

Isabel Fitton was a viola student of Elgar. Describing this movement Elgar wrote that “It may be noticed that the opening bar, a phrase made use of throughout the variation, is an ‘exercise’ for crossing the strings – a difficulty for beginners; on this is built a pensive and, for a moment, romantic movement.”

Representing the Malvern architect Arthur Troyte Griffith, this movement meant a lot to Elgar. Griffith was one of the composer’s closest friends, and it is said that this movement represents an occasion when the pair when for a walk in a thunderstorm. The pair took cover in the house of Winifred and Florence Norbury, to which the next variation refers. The bombastic nature of this movement is enthusiastic and is supported by the one-in-a-bar time signature.

Winifred Norbury is at the heart of the eighth variation, with Elgar writing that “the gracious personalities of the ladies are sedately shown. Winifred was more connected with the music than others of the family, and her initials head the movement; to justify the position a little suggestion of a characteristic laugh is given.”

By far the most popular and well-known variation of the set, Nimrod is set in the classic Elgarian key of Eb. The variation is a tribute to August Jaeger, who was the editor of Novello, who was the one person who recognised and championed Elgar’s music, whilst most others were deaf to it. Although now often used as a somewhat funeral elegy, the work’s original idea was to depict a memory of a summer evening where Jaeger spoke to Elgar about Beethoven’s slow movements, hence the reference in the opening bars to Beethoven’s Pathetique sonata.

The rich orchestral writing and the dazzling climaxes makes it perhaps Elgar’s most performed work, with it often being performed as a stand-alone work. The luscious harmonies and soft movement creates a dynamic atmosphere that pulls on your heartstrings from start to finish.

An ideal contrast to the emotional turbulence of Nimrod, the humorous tenth variation is nicknamed after Dora Penny. A young girl who always put a smile on Elgar’s face. The music depicts her slight stammer, which is affectionately played by the woodwinds.

Organist at Hereford Cathedral, George Robertson Sinclair was an energetic and dynamic musician. Elgar describes this variation: “The variation, however, has nothing to do with organs or cathedrals, or, except remotely, with G.R.S. The first few bars were suggested by his great bulldog, Dan, falling down the steep bank into the River Wye; his paddling upstream to find a landing place; and his rejoicing bark on landing. G.R.S. said, ‘Set that to music!’ – so I did; here it is.”

Cellist Basil George Nevinson is the basis of the twelfth variation. Opening with a cello soli, the whole movement is a moving tribute to their lovely friendship. The variation leads into the next without a pause.

The asteriks, according to Elgar, stood for Lady Mary Lygon of Madresfield Court, who was on a sea voyage at the time this work was composed. The drums suggest a distant chugging of engines of a ship, over which the clarinet plays quotes from Mendelssohn’s Calm Sea and Prosperous Voyage. Elgar apparently chose to use an asterisk instead of Lady Mary’s actual name due to superstitions surrounding the number 13 and because he felt uneasy about publicly associating the name of a prominent local figure with music such as this.

There is also speculation that Elgar wrote this movement whilst thinking back to his engagement with violinist Helen Weaver, who contracted tuberculosis and sailed out of his life in 1885 to New Zealand.

The finale movement is said to be Elgar’s self-portrait. ‘Edoo’ was his wife’s nickname for the composer. The themes from two variations come through: ‘C.A.E’ and ‘Nimrod’, which refer to Alice and Jaeger, who were “two great influences on the life and art of the composer.” The assertiveness of this movement shines through the pulsating rhythms and celebratory finale that anticipates the opening sequence of what then turned out to be Elgar’s powerful First Symphony.

Now one of his most successful works, Enigma Variations is a collection of tantalising works based on a very clever theme. The change in character for each movement makes it a dynamic and highly personal work for the composer. Nimrod in particular has garnered much popularity due to its use in films, popular media in concert halls. Elgar used the theme from Nimrod in his later orchestra and chorus work The Music Makers.

You might also enjoy… Edward Elgar: The Music Makers