Gilbert Vinter (1909-1969) was most known for his work as a conductor and as a composer of brass band music. Vinter was a chorister at Lincoln Cathedral when he was a young boy. He later took up the bassoon. He conducted the BBC Concert Orchestra, BBC Military Band and led several RAF bands during his career as a conductor.

As a composer, Vinter’s works for brass band have often been used as test pieces for contests due to their challenging technical work and firm roots in good quality brass ensemble playing. 1960 saw Vinter’s first major work for brass band surface. The Daily Herald newspaper partnered with sponsors of brass band contests to commission Vinter to compose a new work. From this commission Salute to Youth (1961) was born. Other popular brass band works by Vinter include Symphony of Marches (1963), Variations on a Ninth (1964), James Cook – Circumnavigator (1968) and Spectrum (1969).

Spectrum was first performed by bands during the 1969 British Open, after some grumblings ensued about the difficulty of the work and the use of extra percussion. As the name suggests, Spectrum depicts different colours of the spectrum, using various techniques and sounds to convey emotions and more. In Vinter’s original 1968 short score, the piece started with ‘White’, however this was cut from the final 1969 contest version. Another big change was the last section, which was originally ‘Indigo’, but ‘Purple’ was later added, and some believe this was due to Vinter knowing he was terminally ill, so he chose a colour of mourning to end this epic piece. The first winners were Grimethorpe Colliery Band in 1969. 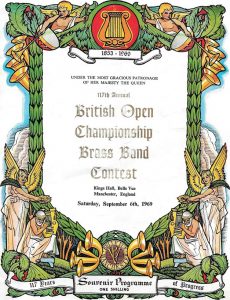 As the lower band begins to slowly build, the rest of the band follows until the climax of the chromatic scale is reached. Screeching upper cornets trill in harmony as the middle of the band plays the first sign of a theme. Acrobatic cornets run up and down scales as the lower band has the theme. As the band unite for the final chord that segues into ‘Red’, the alarm bells are definitely ringing.

The angriest movement of them all, the music of ‘Red’ is alarming, aggressive and loud. Lots of repeated machine gun-like notes spit out from across the band with strong cornets adding the theme. Militaristic in style in places, the band are regimented and completely bound by Vinter’s tough rhythms. The snare drum is a huge support during these sections, adding that militaristic feeling. Vinter writes very dramatic dynamics throughout Spectrum, and this movement is no exception. With loud tutti notes marked FFz pp, the music can be painfully loud in one moment, and deathly quiet in the next. Thrilling arrangements within the band create these unifying moments that are so electrifying, the audience will be stunned by the brashness of the writing.

A variation of one of the themes is repeated a fifth up, with the cornets leading the melody here and the lower band adding stabs. The mysterious build up leads into a chordal build up that is relieved by a downward chromatic scale that leads into ‘Orange’.

An intricate movement that is opened with an unconventional bongo theme, Orange is based largely around solo voices around the band. Influenced by jazz rhythms in some areas of the movement, Orange sees muted cornets experiment with tough accents whilst the lower band play a more reactive part. The solo cornet and euphonium dance around rhythms which leads to a climactic theme played by all. This then dies down and the solo cornet leads us into ‘Yellow’.

As aforementioned, Vinter experimented a lot with dynamics in Spectrum, and this section is the best example of it. The intricate upper cornet line leads the way as Vinter’s classic interlocking themes come into the spotlight. Bold lines that swing between sections of the band creating a lilting feeling. Some corners of Yellow are light, whereas others are bold and heavy. The constant fluctuation makes Yellow a rather intriguing section, with upper cornets and euphoniums leading the way. The band come together for the final accel before a dramatic general pause.

The token lyrical movement of Spectrum, Green starts with pulsating cornets below a lyrical soprano cornet and horn duet. The dramatic change in tempo here is exciting and shows a new side to Vinter’s style. The solo cornet has a number of soloistic lines made up of demisemiquavers and triplets. Lamenting trombones add colour as the solo euphonium mimics the solo cornet line. A big run up allows the upper cornets to lead the new tutti theme, marked appass. The quiet dynamics used throughout this movement add to the atmosphere, which is calm and serene, just like the colour green.

A quick change in tempo has blue off to a flying start. The upper cornets have repeated quavers, whereas the melody lies in euphonium and back row cornets. This jaunty movement is playful, cheeky and littered with quick changes. A fanfare-like theme begins and this leads to an upper cornet theme based on the D major scale. Now we hear a typical Vinter melody that is straight from his wheelhouse. The boldness creates a brash climax which quickly falls back into the opening material for this movement. The percussion help drive the music forward as the music prepares for the dizzying transition into ‘Indigo’.

Think carousel rides, going on the big dipper and around the Ferris wheel once more. This waltzing movement is full of dips, twists and turns. Lead by the upper cornets and euphoniums, the scalic runs are set as triplets that become syncopated throughout. The light interludes are fairground-like, with quick chromatic scales and grace notes adding to the excitement of the movement. A deathly quiet section ensues, with half the band dropping out to create the desired effect. This builds into a final round of the main theme before a band-wide descending chromatic scale leads into the final section of the piece.

The dramatic pulsating bass figure is the core foundation of the section. Led by the baritones, euphoniums and trombones, the theme is played loud and proud. As the cornets join with their response to the theme, the band unite for a theme played completely in unison. The dynamic is loud and the intensity is the highest it has been the whole piece. There are three bars where the dynamic completely drops and the lower band take the reins. This leads to a variation of the very opening of the piece with the chromatic rumblings. This again leads to screeching cornets as the final theme is presented by the lower band before a quick pause cuts the sound dead before the absolutely epic final chord, which shimmers across the whole band.

This blog is dedicated to all the members at Old Silkstone Brass Band.

You might also enjoy… Gilbert Vinter: Symphony of Marches

Ursula Mamlok: Constellations Context Born on February 1st, 1923, Ursula Mamlok was born in Berlin, Germany into a primarily Jewish family. Her biological father, Hans Meyer, died when she was a baby, but her mother Read more…

John Ireland: The Holy Boy Context John Ireland’s The Holy Boy has seen a huge transformation over the course of 30 years. The original version dates back from December 1913, and was part of Ireland’s Read more…