Felix Mendelssohn ‘Violin Concerto in E minor’: A Romantic Tour of the Violin

Felix Mendelssohn’s Violin Concerto in E minor is a thrilling three-movement work that has become a staple piece for violinists all around the world. In the midst of the ‘changeover’ between classicism and romanticism, this work sees Mendelssohn at his best, writing with firm roots in both styles.

Born in 1809 in Hamburg, Mendelssohn was regarded as a child prodigy alongside his older sister, Fanny Mendelssohn. Johann Sebastian Bach was a big influence for Mendelssohn, with his early fugues and chorales resembling Bach’s compositional style. Mendelssohn’s first public concert was when he was 9 years old, where he accompanied a horn duo. Aged 15, he wrote his first symphony in C minor, which was a huge success when premiered in Berlin in 1824. Mendelssohn wrote a large catalogue of music which covered a broad range of different performance disciplines such as, chamber groups, symphonies, concertos and piano music. As well as being an incredibly successful composer, Mendelssohn also had a fine hand for watercolour art . Mendelssohn was known for his aloofness and his frequent fits of temper which usually led to him collapsing, which is said to be tied in with his young death. 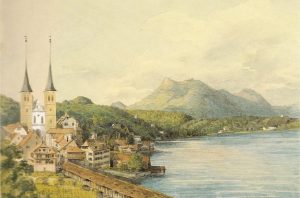 He composed the Violin Concerto in E minor within a six-year period between 1838-1844, which has led to much speculation as why it took so long to write. The work was premiered in 1845 in Leipzig, and was welcomed with very positive feedback and the soloist, Ferdinand David, was complimented on his fine, virtuoso playing. The work consists of three movements, though all played attacca (tied together with no breaks). You can hear Mendelssohn’s affiliation with the classical period through components such as the form of the movements, and the harmony and tonality that he uses with the foundation of this work.

The first movement has always been praised for its innovative ideas and exciting opening to the concerto. Instead of an orchestral opening, Mendelssohn writes the solo violin 1.5 bars into the piece, a technique that very much points towards romanticism. The solo violin plays the famous first theme in E minor, which forms the basis for the melodic framework of this movement. After the solo violin plays more virtuosic passages, the orchestra then plays the main theme in E minor, which is like an awash of colour and romantic sound.

The movement then modulates to G major after a lot of chromatic movement, which really heightens the tension and the thought of where Mendelssohn will go next. The tranquillo section, where Mendelssohn modulates, shows off the woodwinds, with the solo violin playing a drone note on an open G-string. A written codetta is then played by the soloist, which accentuates the versatility of the player and the instrument.

The first theme then returns in the development section after the codetta. The two main themes are then combined in the development section which head towards the final cadenza of the movement, which was written out by Mendelssohn instead of letting the soloist improvise. The cadenza is incredibly difficult and requires ricochet bowing from the soloist.  The main theme is then played again in a variation in the recapitulation section which provides a luscious sound from the orchestra. Mendelssohn manipulates the second theme by putting it in E major before returning back to the home key of E minor and these chromatic shifts make for such an interesting listen. The music gathers some more momentum leading into the finale presto section which ends on long semibreves from the orchestra, this then leads into the second movement.

Marked Adagio, the second movement is segued by a bassoon, which leads into the winds and strings layering up to create a more rounded and fuller texture before the soloist returns. This movement is in 6/8 which gives off a smooth effect from the string rhythm. The sustained B from the bassoon then raises a semitone to middle C which serves as the key change from E minor to C major.

The middle section is in the relative minor key of A minor, which adds a level of depth to this section of the movement. Much dexterity and technical ability is required from the soloist within the middle section of this movement as its a relentless semi-quaver pattern which is quite unforgiving. A beautiful climax near the ends lets the winds wind down to a serene conclusion to the movement, which is a beautiful end to a dark, yet very fulfilling movement.

Straight into the third movement after the general pause, this movement begins with a fourteen-bar passage with only the soloist and strings which acts as a transitional passage to the lively finale. The allegro section is started off by a bright trumpet fanfare which then sets this fast-paced movement off. This movement is in sonata-rondo form and it sees the soloist having to play some incredibly fast passage work. A lot of call and response between the orchestra and the soloist is heard in this movement which is a wonderful ‘coming together’ moment for the orchestra and soloist. Reminiscent passages from the first movement’s cadenza are heard in the transitional passage in B major, which is followed by rapid semi-quaver movement from the soloist.

A short development section is heard in G major, this then leads into the recapitulation section of the movement. The main theme returns at the end of the movement, played by the woodwinds. This  acts as a somewhat cadenza section, though it’s not in its original form. The concerto then ends with a fiery coda section which is strong and brings all the instruments, plus the soloist together to end on a strong E major chord after a thrilling ascending sequence by the soloist.