Composed in 2018 for wind quintet, Angela Slater’s The Sun Catcher  takes inspiration from the folklore-laden popular garden showpiece. Creating a spectrum of colours, textures and brightness, sun catchers are known for their stories of capturing pieces of the sun and bring the lightness down to earth, leaving only darkness above. A truly intriguing theme for a piece which sees Slater take two novel approaches to The Sun Catcher. In her programme notes she mentions that:

“Sun Catcher explores two different musical ideas happening simultaneously in parts of the piece. The first is serene and expressive exploring shimmering light and colour. The second is fast, underlying and increasingly agitated music. This gradually infiltrates each instrument’s line and captures the serene music from before, holding it hostage on a manic rampage and race to the end of the piece.” 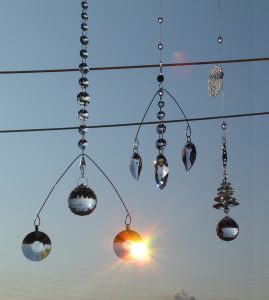 As part of Iluminate Women’s Music’s 2020 concert season, The Sun Catcher will be performed at the Royal College of Music. I caught up with the Founder and Artistic Director, Angela Slater, to find out more about this intriguing work…

Where did the inspiration come from for this work?

In my works I like to take inspiration from extra-musical materials and most often from the natural world. My piece Sun Catcher draws on both the imagery of a metal Sun Catcher and folklore around the sun catcher myths. A Sun Catcher is a metal object that spins in the wind capturing the sunlight and creating colourful patterns. There are also many myths and folklore tales about how the sun was once captured, and either fixed in its proper sphere or else made to stand still in the sky.

Other tales explore the idea of capturing the sun and bringing it down so darkness could prevail. So in my piece Sun Catcher I explore both themes, therefore essentially having two competing musical ideas occurring simultaneously in parts of the piece.

The first is serene and expressive exploring shimmering light and colour. The second is a fast, undulating and increasingly agitated music as though the music itself is trying to capture the sun and drag it from the sky. This agitated music gradually infiltrates each instrument’s line and captures the serene music from before, holding it hostage on a manic rampage and race to the end of the piece.

Why use a wind quintet for this particular work?

This work was originally commissioned by York Late music concert series back in 2018 and the commission was to write for the Atea wind quintet, so the instrumentation came before the idea of the piece. I thought about the potential of colour, range, texture such an ensemble can create and this led me onto the idea of Sun Catcher.

How have you managed to make the colours from the sun catcher translate into music? Were there any particular techniques that helped with this?

In this piece I am not trying to evoke any particular colour but trying to express varying shades of colour and the shimmering of light you would see visually on a sun catcher. These subtleties in fluctuations of shades and colour are created through techniques such as same note tremolos in the horn part, and timbral trills at various points for the flute, clarinet and oboe.

I also make use of practice mutes for the horn, giving the horn this fantastically beautiful subtle colour. Also the clarinet’s undulating material at first evokes this shimmering light of the sun catcher before it becomes increasingly agitated as this material is passed around the ensemble gradually shifting as though trying to capture the sun and drag it from the sky.

Can you tell me a bit about the festival that this work will be performed at?

Each year Royal College of Music put on a Chamber music festival to showcase the talent of its students and past students. Putting on concerts contributed the variety of music taught and programmed at the college. Last year I was delighted for the first time to be invited to curate an Illuminate concert for RCM.

The concert was a great success and the students at the college took a deep interest in the repertoire. Some of the ensembles took the repertoire into their regular concert repertoire. I was particularly proud to see this happening as it is only if young performers take on the music by women from the past and present that it will get heard by audiences. I was so delighted to be invited back and to hear how popular the concert has been amongst students. I am certainly looking forward to 15th February to hear how the students have got on with the repertoire I selected.

Can we look forward to hearing some new music from you soon?

Yes indeed! I have a busy year ahead regarding composing and performances. I am currently working on a new work for saxophone and piano which will be featured in Illuminate’s next season touring around the UK over the next few months. I am also writing a piece for string quartet and piano with percussion which will be performed at the Vale of Glamorgan Festival in May.

In the summer I will be off to the US music festival Tanglewood as a composition fellow. I will be having my work Shades of Rain performed whilst I am there and will be working on a number of new works with musicians while I am there also. I am also writing a piano concerto for pianist Laura Farré Rozada which will be performed in December this year in Birmingham.